Nye, best known as the host of the 1990s PBS show, cited a study that concluded Canada could live entirely without fossil fuels if it fully embraced renewable energy sources. Trudeau responded by praising the future of renewables but said Canada needs pipelines now 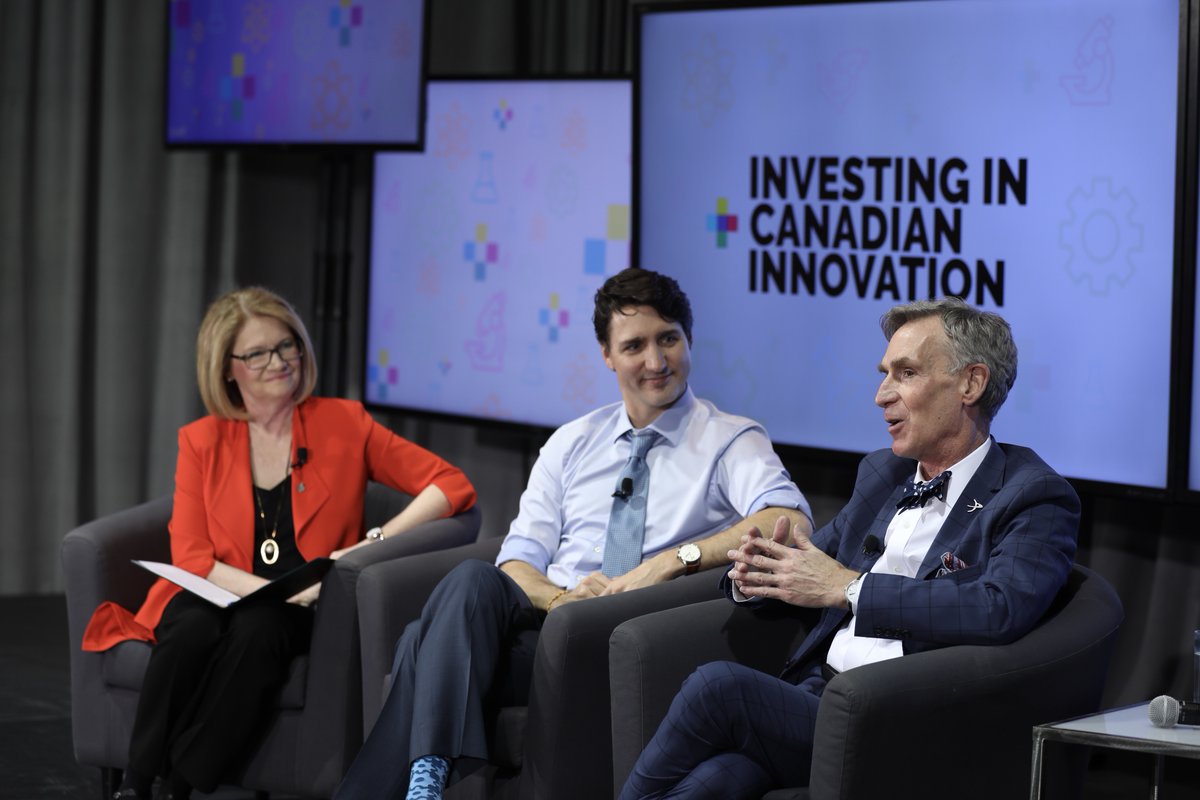 The Canadian PM and the TV personality interacted at a panel discussion on science and innovation in front of students at the University of Ottawa. PHOTO: Justin Trudeau/Twitter

OTTAWA—Popular TV science personality Bill Nye put Prime Minister Justin Trudeau on the spot Tuesday to explain Canada’s approval of a controversial pipeline which, if built, will increase the flow of oil from Alberta to the Pacific coast.

“Tell us about the Kinder Morgan pipeline,” the American scientist asked Trudeau as they concluded a panel discussion on science and innovation in front of students at the University of Ottawa.

As he prodded the prime minister, Nye, best known as the host of the 1990s PBS show “Bill Nye the Science Guy,” and more recently for the Netflix series “Bill Nye Saves the World,” cited a study by a group called The Solutions Project that concluded Canada could live entirely without fossil fuels if it fully embraced renewable energy sources.

Trudeau agreed there is tremendous potential in Canada to develop renewable power from wind, solar, geothermal and as-yet-unimagined sources.

But he added that, in the meantime, Canada will continue using oil and still needs to get its resources to market in the safest way possible—and doing so requires that pipelines be built.

“We are going to have a transition phase while we develop alternatives to fossil fuels,” Trudeau explained.

“So while we are developing those alternatives … we still need to be able to power our homes, our cars, our economy.”

Since then, the Trans Mountain project has pitted the NDP-led governments in Alberta and British Columbia against each other after B.C. proposed new oil spill regulations that would effectively block new oil pipelines from reaching the West Coast.

Nye said he was encouraged by respected environmental colleagues in the United States to speak out against the Kinder Morgan pipeline while with Trudeau, which he didn’t do on stage.

Instead, he applauded the Liberal government for investing in scientific research and later said he accepted Trudeau’s explanation for why Canada needs the Kinder Morgan project.

“It’s your country, Canada’s going to do what it’s going to do,” Nye said, making a point of referring to his own country’s government as an environmental laggard.

“And the prime minister had a very well-thought-out answer that it’s for economic development in the short term.”

However, the bow-tied mechanical engineer later made clear his belief that pipelines, in general, are not the final solution for Canada’s energy needs.

“The pipeline is, in the big picture, bad,” Nye told reporters.

“But in the short- and medium-term, what are you going to do?”

Nye also made known his feelings about Alberta’s oilsands as an inefficient source of energy, using the term “tar,” a label despised by the province’s oil industry.

“You have to use almost a third of the energy in the tar to make synthetic crude oil.”