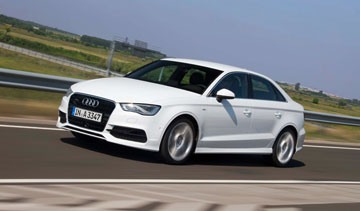 The Audi A3 sedan. PHOTO Audi

BERLIN—German authorities on March 15 searched the offices of luxury automaker Audi in connection with the scandal over emissions tests by its parent company, Volkswagen.

The raids were part of a fraud investigation into Ingolstadt-based Audi, launched by prosecutors in Munich several weeks ago.

Volkswagens and Audi vehicles with 2-litre diesel engines make up the bulk of the vehicles caught up in Volkswagen’s emissions cheating scandal.

Audi spokesman Moritz Drechsel said that the raids were focused on the company headquarters in Ingolstadt and at its plant in Neckarsulm in the neighbouring state of Baden-Wuerttemberg.

“Audi is fully co-operating with authorities as we have the highest interest in clarifying matters,” Drechsel said, adding that he could not comment further due to the ongoing investigation.

Volkswagen has admitted it equipped diesel engines with software that detected when the vehicle was being tested and turned the emissions controls off during everyday driving. The result was cars that emitted some 40 times the U.S. limits of nitrogen oxides, a pollutant that can harm people’s health. Millions of cars worldwide had the deceptive software.

On Friday, Volkswagen pleaded guilty in the U.S. to a scheme to get around American pollution rules. If a judge agrees to the Justice Department’s sentencing recommendation, the scandal will cost the company more than $20 billion in the U.S. alone.

In addition to the Munich investigation of Audi, however, prosecutors in Braunschweig, Germany, are also investigating Volkswagen itself for possible criminal misconduct.