The U.S. president has a habit of attacking world leaders online, a tactic used to appear tough and draw concessions. One leader has so far been exempt from this: Vladimir Putin

July 24, 2018  by Jonathan Lemire And Zeke Miller, The Associated Press 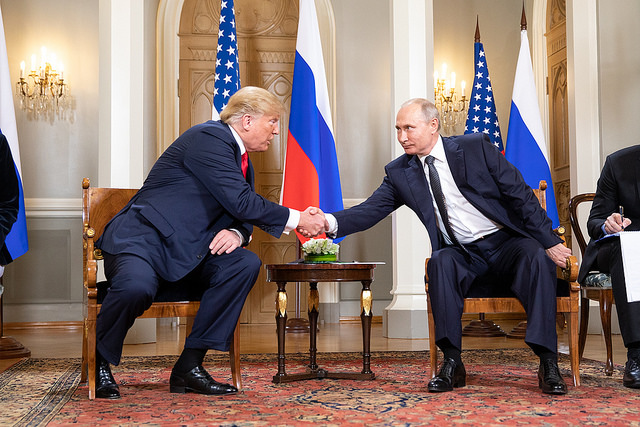 The Russian autocrat has never been attacked by the U.S. president on Twitter. PHOTO: The White House/Flickr

WASHINGTON—As the presidential tweets ricochet from one world hot spot to another, a Trump Doctrine has emerged: Claim matchless strength, suffer no slight and counter-punch harder than you are hit—at least verbally.

President Donald Trump’s searing ALL CAPS response to a relatively routine Iran provocation is the latest example of Trump’s refusal to show weakness, continuing a pattern that includes showdowns with North Korea, China and even NATO allies, with Russia the notable exception. Trump’s tough-guy rhetoric has become a defining characteristic of his overseas affairs, as have the relatively modest results.

His late Sunday tweet warning of “CONSEQUENCES THE LIKES OF WHICH FEW THROUGHOUT HISTORY HAVE EVER SUFFERED BEFORE” caught Trump’s staff by surprise, sparked a fresh day of foreign policy confusion, and triggered fears of a potential nuclear showdown in the Middle East. The tweet was reminiscent of Trump’s brash warning of “fire and fury” for North Korea last year, part of an exchange of bravado in which he and Kim Jong Un’s government compared the relative size of their nuclear buttons.

White House officials now cast those exchanges with Kim as a negotiating tactic to bring the mercurial autocrat to the negotiating table, culminating in last month’s Singapore summit. But despite Trump’s pronouncements that he is “very happy” with the results of the summit, the North has yet to take concrete steps toward denuclearizing, nor has it returned the remains of some U.S. service members, as was promised as part of the two-page agreement signed in Singapore.

Press secretary Sarah Huckabee Sanders wouldn’t rule out that the latest tweet about Iran was a similar negotiating gambit. “I’m not going to get into the president’s strategy,” she said Monday. “But I think he’s very clear about what he’s not going to allow to take place.”

The Iran tweet, responding to the latest threat from Iranian President Hassan Rouhani, came on the heels of a frustrating week for a White House reeling from denunciations of Trump’s treatment of Russia’s Vladimir Putin during their summit in Helsinki. The president initially refused to say whether he believed the U.S. intelligence community’s conclusion that Russia interfered in the 2016 election, instead giving equal weight to Putin’s denials.

Critics were quick to seize upon his Iran threat as an attempt to change the subject. Sanders retorted: “I think the president has the ability, unlike a lot of those in the media, to actually focus on more than one issue at a time.”

But the broadside to Tehran fit a pattern for Trump, a commander in chief who responds to the slightest provocation with punishment. The all-caps shot across Iran’s bow appeared to be prompted by a speech by Rouhani, who told diplomats Sunday in Tehran that Americans “must understand that war with Iran is the mother of all wars and peace with Iran is the mother of all peace,” state television reported.

Sen. Dianne Feinstein, D-Calif., tweeted that Trump has a “dangerous habit” of attacking world leaders online. She said his “obsession with looking tough on Twitter is weakening our standing on the world stage and seriously jeopardizing our national security.”

Beyond his months long rhetorical volleys with Kim, Trump has unleashed verbal attacks against friend and foe alike when he felt disrespected. After last month’s Group of Seven meeting of industrialized nations in Canada, that nation’s prime minister, Justin Trudeau, delivered a mild rebuke to Trump by suggesting that Canada may have to levy retaliatory tariffs against the United States.

“Canadians, we’re polite, we’re reasonable, but we also will not be pushed around,” Trudeau said.

During this month’s NATO summit in Brussels, Trump deployed similarly incendiary language, accusing Germany of being controlled by Russia and repeatedly casting doubt on the cornerstone of the NATO alliance, a commitment to mutual defence. Trump claimed his rhetoric secured concessions from NATO allies to boost their spending on defence closer to the previously agreed-upon target of 2 per cent of gross domestic product by 2024, but the increases he claimed were already in the works. As the U.S. leader reveled in a celebratory media tour, allies denied they had given Trump anything of substance.

During the tariff standoff with China, Trump has repeatedly escalated his fiery language—and boasted that trade wars are “easy to win”—only to see Beijing retaliate and levy tariffs that could cripple some American workers, including farmers, who have trended toward supporting the president.

Related: Trump ready to hit all Chinese imports with tariffs

But for all of Trump’s diplomatic bluster, there is one nation with which he has tended to pull his punches: Russia.

As the special counsel probe into possible links between Russia and Trump campaign officials forges on, Trump has stepped up his attacks on the investigation while also trying to draw closer to Moscow. In one of his tweets over the weekend, he deemed Russian election interference “a big hoax,” yet again casting doubt on the findings of this nation’s intelligences agencies.

Sanders insisted Monday that the Trump “has been extremely tough on Russia, probably more so than with any other country” and wondered “why that is so hard for the media to write about.”

But while the Trump administration has moved to enact some tough sanctions on Russia, the president himself has repeatedly sought to tighten ties to Putin, whom he invited to the White House this fall even after the firestorm of controversy sparked by the Helsinki summit.

Putin’s visit drew a cool response from Republican leaders, who have no plans for the Russian to address Congress. And some would prefer he not visit the U.S. in the fall at all.

“I’m one who thinks that it’s a good thing for leaders of countries to talk, but I would consider putting that one on the back burner for a while,” said Sen. John Cornyn, R-Texas.