Notley spoke Sunday to 1,200 delegates on the final day of the Alberta NDP's last convention before an expected spring election 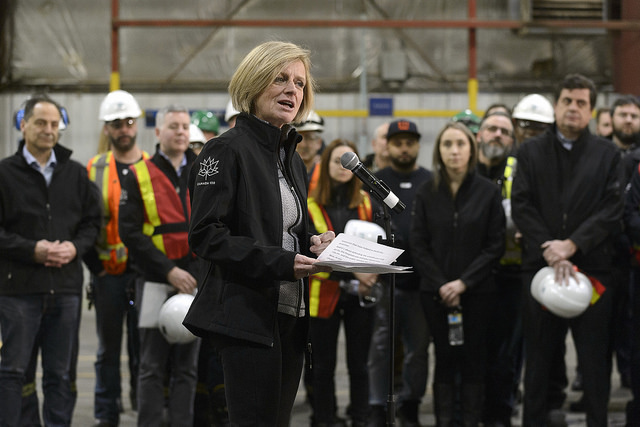 EDMONTON—Rachel Notley has made it official, announcing she will run again in the next election, touting her government’s record while slamming opponent Jason Kenney as a self-serving policy huckster.

“I’m not done fighting because we have only just begun!” said Notley to a standing ovation in her keynote address Sunday to party faithful.

“My name is Rachel Notley, and I am running again to be your premier!”

It was one of 15 standing ovations as Notley spoke Sunday to 1,200 delegates on the final day of the Alberta NDP’s last convention before an expected spring election.

To cheers, Notley cited the changes her government has imposed, from the climate plan, to economic diversification initiatives, labour law changes, a higher minimum wage, and increases to core services in health, education and social services.

She noted the Calgary Cancer Centre is under construction and there are new schools and roads.

That has come with a hefty price tag. Notley’s government has racked up steep multibillion-dollar deficits throughout its term to pay for capital projects and day-to-day spending.

Notley also addressed the problems affecting Alberta’s bedrock petrochemical industry, which has been struggling with deep price reductions on oil due mainly to pipeline bottlenecks, forcing Alberta producers to sell only to the U.S. market at a deep discount.

Notley’s government is waiting for work to resume on the Trans Mountain pipeline to the B.C. coast, but said they are also working on the value-added side of the equation, processing more oil in Alberta rather than shipping raw product elsewhere for upgrading.

“Over the life of its production, this project will support more than 13,000 jobs and generate hundreds of millions of dollars in revenue,” she said.

“And there’s another plant with a final investment decision coming in a matter of weeks. That plant will create even more jobs—thousands more.”

She said details of a new major energy diversification effort will be announced in the coming weeks.

The premier chided past Progressive Conservative governments for not building on energy diversification efforts launched by former PC premier Peter Lougheed in the 1970s.

“The old government sat around and dithered while Louisiana and Texas ate our lunch,” said Notley.

“The time has come for Albertans to seize the initiative, to take more control of our own economic destiny and to supercharge energy upgrading here in Alberta.”

The premier also took aim at Kenney and his United Conservatives who have been leading in popular opinion polls.

Notley cited a letter that surfaced last week from the Motor Dealers’ Association of Alberta stating that Kenney, in a fundraising pitch, promised to make legislative changes to benefit car dealers.

“(Kenney) got caught promising to gut promotions for the family buying a minivan, in order to help fill the pockets of a few car lot owners,” said Notley.

“I say a few owners, because the fact is we have heard from many others in that industry who think his plan is disgusting. And it is!” said Notley to applause.

“But it sure does sound like he’s willing to work out one heck of a lease!”

Kenney has denied selling policy for funding and the Motor Dealers’ association has said the letter was misleading and Kenney has not promised anything.

But Notley, citing the UCP’s plan to freeze or impose cuts to spending to balance the books while rolling back many of her government’s policies, said the UCP should come with a health warning.

“Beware,” said Notley. “This product will privatize your health care, cut your kids’ education, roll back your rights, and hand a big fat tax cut to the top one per cent. It will hurt you. For more information, call Jason Kenney.”

UCP House Leader Jason Nixon, at the convention, told reporters that Kenney has been clear any budget reductions will not be done at the expense of frontline service in key areas.

He said Notley’s speech and the attacks on the UCP at the convention smack of a desperate party.

“(It) shows that the NDP are scared right now and fearful for their campaign upcoming and their chances.”