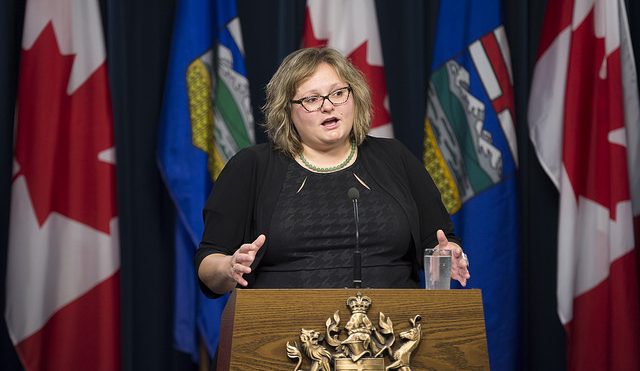 Last month Sarah Hoffman, Alberta’s deputy premier took aim at several power distributors, saying the government was looking to protect “everyday Albertans from having to pay for the business losses of Alberta’s biggest and most profitable power companies.” PHOTO: Chris Schwarz/Government of Alberta, via Flickr

CALGARY—A new paper says Alberta ratepayers will be on the hook for about $600 million in new losses if the provincial government takes on a group of unprofitable electricity contracts—not upwards of $2 billion, as the NDP has said.

The study released Aug. 9 by economists Andrew Leach and Trevor Tombe concludes that a typical household would face an additional $2.25 on their monthly power bills for the four remaining years on a group of coal power contracts that companies are trying to terminate.

Power distributors including Enmax, TransCanada, Capital Power and AltaGas are trying to return those contracts to the government-run power distributor known as the Balancing Pool, because they say the NDP’s carbon regulations have increased their losses.

But the government is going to court to challenge a clause that gives companies the right to terminate power purchase agreements if regulations make them “more unprofitable,” rather than simply unprofitable.

The University of Calgary School of Public Policy paper by Leach and Tombe says that the total lost value on coal power contracts from lower prices and carbon regulations amounts to about $900 million, with $300 million of that coming from the Genesee coal plant for which the government power distributor is already responsible.

The paper says about half of the lost value comes from new carbon regulations, while a significant drop in power prices—which are currently under $20 per megawatt hour—makes up the other half.

“The average price before last year was about $65 (per megawatt hour), so a big drop in power prices,” said Tombe.

He added the recent drop in wholesale power prices has meant that so far in 2016 the energy charges for the typical household are about $10 per month cheaper than 2015, and $24.50 per month less than in 2014.

“One important take-away that I would want to communicate to the general public is that the reason why these (power purchase agreements) are losing money is precisely the same reason that you’re saving money on the energy charge on your bill,” said Tombe.

Leach, who chaired the government Climate Leadership Panel that recommended some of the revised carbon regulations, said the panel did not model the potential impacts of money-losing contracts.

He said when the panel recommended eliminating higher carbon emissions allowances for coal plants compared with natural gas, power prices were expected to be high enough to make up for the extra $15 per megawatt hour the policy was expected to cost.

But since then, power prices have dropped to roughly half of what the Balancing Pool expected last September when the policy was drafted.

Despite the steep drop in power prices, Leach and Tombe expect the coal power contracts to return to profitability later in the decade as prices return closer to normal levels, just not enough profitability to offset losses in the near term.

The NDP government declined to say what price assumptions it has based its $2 billion in losses on, but Leach said that if prices did remain at the lows of today that losses could be in the ballpark of the government’s estimate.

He said however that if prices did stay as low as today, then the savings in the overall rate would likely be higher than the extra costs placed on consumers through the Balancing Pool.