A propeller popped off the Saab 340 while it was in the air, but the plane was able to land safely; Australian airline Rex grounded five aircraft with similar specifications as a precaution 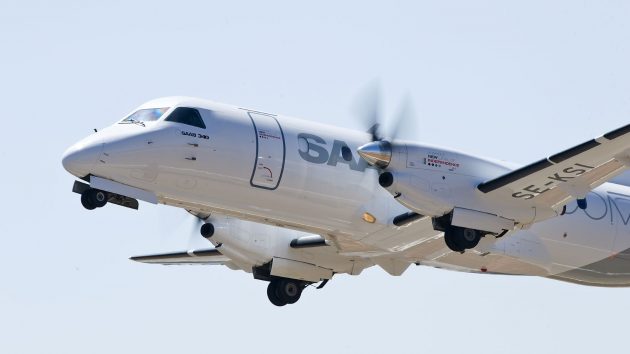 The Saab 340 runs on twin propeller engines, but it is designed to climb, cruise and land on a single engine. PHOTO: Saab

CANBERRA, Australia—Five Regional Express Airlines passenger planes were grounded as a precaution after a near disaster in which a propeller fell off an airliner as it approached Sydney Airport, an Australian airline said on Mar. 20.

A Saab 340 carrying 19 passengers and crew landed safely in Sydney on Mar. 17 after one its two propellers fell off over Sydney’s southwest fringe.

The Sydney-based airline, also known as Rex, said it had grounded another five of its fleet of 55 Saab 340s because their propeller gear boxes and shafts were from the same series as the defective propeller.

“This is an extremely rare event,” Rex’s chief operating officer Neville Howell said in a statement.

The only recorded similar mishap occurred in 1991 when a Comair Airways plane landed safely after losing a propeller, Howell said.

An Australian Transport Safety Bureau investigation team was examining the damaged aircraft in Sydney. Investigators also want to examine the propeller for clues, but that had not been found by Mar. 20, Rex said.

Flight 768 was flying from Albury, 500 km southwest of Sydney, when the pilots shut down the right engine due to “abnormal indications,” Rex said.

The pilot then saw the spinning propeller assembly leave its shaft and fly over the wing without touching the plane, the airline said.

Australian Licensed Aircraft Engineers Association president Paul Cousin said those aboard the plane were “lucky in the extreme” that the propeller had not sliced into the fuselage or tail of the plane.

The Saab 340 is designed to climb, cruise and land on a single engine.