In a speech to defence sector elites, Harjit Sajjan said "status quo spending on defence will not even maintain a status quo of capabilities" 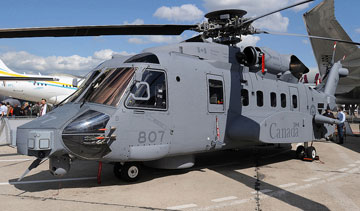 OTTAWA—Questions swirled as Defence Minister Harjit Sajjan on May 3 offered a grim assessment of the state of the military, but stopped short of saying exactly how the government plans to fix it.

In a major speech to high-level defence industry representatives and experts, Sajjan said years of underfunding had hollowed out the armed forces and left them struggling with even basic tasks.

“We are now in the troubling position where status quo spending on defence will not even maintain a status quo of capabilities,” Sajjan said.

“Current funding has us digging ourselves into a hole. A hole that gets deeper every year. As a percentage of GDP, we are spending less on defence today than we were in 2005.”

The comments came as the Liberal government prepares to unveil its new defence policy, which Sajjan promised would begin to address some of the problems.

But the key question for many attendees of the Conference of Defence Associations Institute event was whether the Liberal government will invest billions of additional dollars into the armed forces.

The minister acknowledged during a question-and-answer session with the audience that fielding a credible military is “going to cost money. It’s going to take a significant investment.

But he also pressed a message of the need to get back-to-basics by talking about the overriding need to find money for 18 essential military procurement projects.

Sajjan said the government has to deal with those must-have projects, which include upgrades to two military helicopter fleets and engineering and logistical vehicles for the army, “before it can build anything new.”

Canada currently spends about one per cent of GDP on defence, but Sajjan said the country is stepping up in other ways, such as deploying hundreds of troops to lead a NATO force in Latvia.

Officials have suggested the funding shortfall amounts to tens of billions of dollars.

Even if more money is added, however, there’s no guarantee the department will be able to spend it, as evidenced by the budget decision just a few weeks ago to delay $8.4 billion in planned purchases over the next 20 years.

That problem has been blamed on a shortage of procurement staff, onerous amounts of red tape and a bureaucratic process that has slowed the military procurement system to a crawl.

Sajjan’s frank assessment of the challenges facing the military was largely welcomed by the event’s attendees, but it was clear many remained uncertain about how the Liberals plan to address the issue.

Richard Fadden, who served for two years as the top civilian in National Defence and later as national security adviser to Stephen Harper, said he was encouraged by Sajjan’s focus on defence spending.

“But I’m going to hold my vote until I hear the policy and in particular whether the funding commitments are next year, five years, or 25 years (from now),” he said.

Some were skeptical over whether the Liberal defence policy, which is expected next week, would set the military on a road to a stronger future.

One of the minister’s key messages was that the Liberals had rigorously analyzed the real costs of different procurement projects, and the defence policy as a whole.

That includes enlisting six accounting firms to review how the government and military came up with its costs and ensuring sustainable defence funding.

Defence analyst David Perry of the Canadian Global Affairs Institute said that would help solve some of the problems, but not all.

The minister also accused previous governments, especially the Conservatives, of hamstringing the military by making short-term decisions and not taking a long-term view of what it needs to succeed.

But Stephen Saideman, a military expert at Carleton University, suggested the Liberal decision to buy Super Hornet fighter jets on an interim basis ran counter to that message.

“He said we have to do long-term planning, then we’re buying interim planes,” Saideman said. “So there is that direct contradiction.”