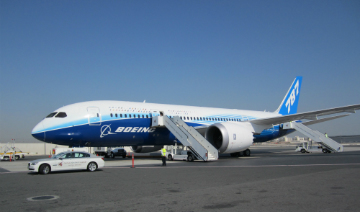 CALGARY—WestJet Airlines Ltd. has placed a firm order for 10 Boeing Dreamliners, which will have the range and fuel efficiency to serve new destinations in Asia, South America and expand the airline’s presence in Europe.

WestJet’s first Dreamliner 787s would be delivered between the first quarter of 2019 and December 2021.

The Calgary-based airline also has an option to buy an additional 10 Dreamliners to be delivered between 2020 and 2024.

The value of the orders wasn’t disclosed, but part of the cost could be offset by converting firm orders of Boeing 737s that were to be delivered to WestJet starting in 2019.

The company says its profit was down, despite eight per cent higher revenue, due to costs related to severe winter weather.