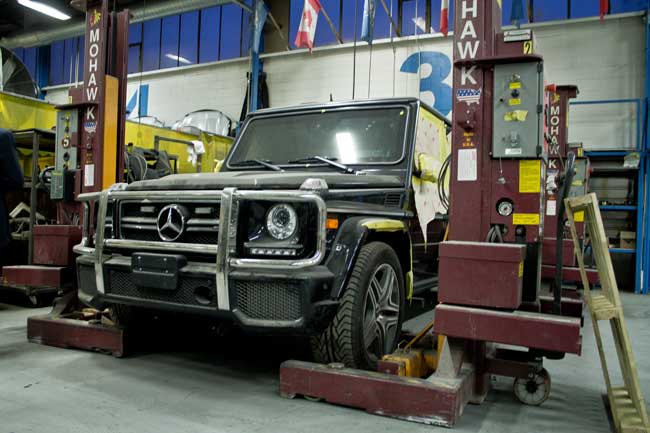 A Mercedes SUV undergoing the Inkas transformation. The company retrofits vehicles with armour and other features for governments and the private security industry. PHOTO: David Kenndy

TORONTO—A group of Ontario business leaders and government officials, including Premiere Kathleen Wynne, have returned from a trade mission to the Middle East with a handful of agreements worth approximately $87 million.

Meeting with Israeli companies in Tel Aviv, Jerusalem and Haifa, as well as Palestinian businesses in Ramallah and Bethlehem in the West Bank, the Ontario delegation penned the majority of the deals in the science and technology and the information and communications technology (ICT) fields.

Toronto armoured car manufacturer, INKAS Group of Companies, also came away with a $25 million deal to build vehicles for the U.S. Department of State in partnership with the Kazi Investment Group. The agreement is expected to create 30 jobs at the North York auto firm.

“This mission is an opportunity to leverage the strong economic and cultural ties between Ontario and Israel to develop new commercial partnerships that will lead to economic growth and job creation in Ontario,” Wynne said.

Among the other 17 agreements was a $50 million deal between the Centre for Commercialization of Regenerative Medicine and six Israeli universities to create a centre for regenerative medicine in Israel. Biomedical firm True Phantom Solutions also signed a $5 million agreement to develop a device to realistically emulate the mechanics of the rib cage, heart, lungs and spine.

The deals are expected to create about 200 jobs within Ontario.