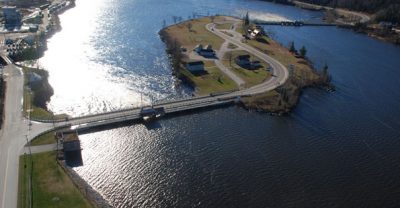 The Quebec dam pictured on the left, while the Ontario dam is seen on the right. PHOTO: Public Services and Procurement Canada

OTTAWA—The federal government has handed down a $2.39 million contract for work on a Quebec dam replacement project to a Quebec subsidiary of U.S.-headquartered consulting firm Tetra Tech Inc.

The Public Services and Procurement Canada contract covers preliminary design work on a replacement dam at the Timiskaming complex, a facility on the border of Ontario and Quebec about 65 kilometres northeast of North Bay, Ont.

The Timiskaming complex consists of two dams located on opposite sides of Long Sault Island in the Ottawa River—one in Ontario and one in Quebec—that control the water level in Lake Timiskaming upstream and the flow of the Ottawa River. The federal government is overseeing the replacement of both facilities, which were built in the 1930s. Construction on the Ontario dam has already begun and is expected to be complete next year, while the design work on the Quebec dam is just getting underway.

The Canadian government said the dams remain safe, but are nearing the end of their useful lives.

The old dams will be removed after work on the replacement dams is complete.