Canadian firms have netted $750 million in work related to F-35 program, yet Trudeau vowed to exclude jet from procurement process during campaign 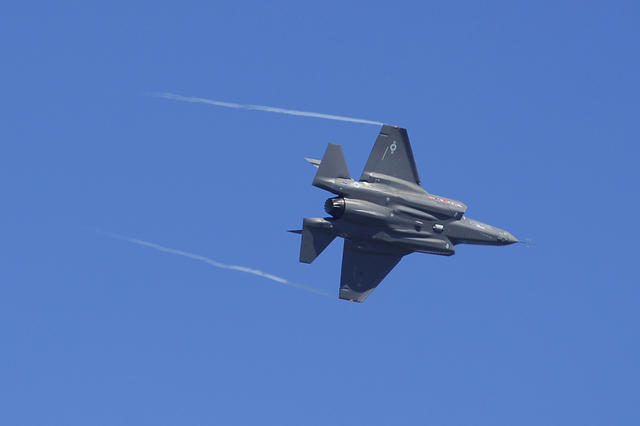 An F-35 Lightning II maneuvers over an airbase in Florida. Procuring the fighter jet to replace the Royal Canadian Air Force’s aging CF-18 has long been a source of contention

OTTAWA—The Trudeau Liberals may have promised to exclude the F-35 from the competition to replace the air force’s aging CF-18 jet fighters, but federal officials meeting the day after last fall’s election were singing a completely different tune, documents reveal.

The records, obtained by The Canadian Press, show top Industry Canada bureaucrats met on Oct. 20 and discussed what advice to give the incoming government about the controversial procurement, emphasizing the decision should be based on requirement, not politics.

“A procurement decision like C-18 replacement is primarily driven by the operational needs of the Canadian Forces,” said the briefing.

Prior to the election, Trudeau said the Liberals would not proceed with the F-35 purchase and would instead run an open competition, with savings from a cheaper alternative set aside to rebuild the navy.

The Liberals have been quietly backing away from that position, with both Defence Minister Harjit Sajjan and Procurement Minister Judy Foote pointedly refusing to exclude Lockheed Martin, the F-35’s U.S.-based manufacturer, from the competition.

The documents provide, for the first time, tantalizing clues as to why the Liberals moderated their tone.

Aside from saying the new fighter must meet the air force’s needs, officials pointed out that opportunities for Canadian aerospace firms to bid on sustainment contracts for the F-35 may be greater than expected.

“The program is beginning to make concrete decisions regarding how the global F-35 fleet will be sustained (i.e. maintenance, repair, simulation and training), said the analysis. ”Like production work, such sustainment work will be allocated on a best-value basis to those countries that have committed to acquiring the plane.

“The industrial value of the sustainment opportunities can be expected to be even higher than that associated with production, with such opportunities anticipated to be valued in the billions of dollars, with similarly no guaranteed value of work.”

Unlike regular military equipment purchases made by the federal government, the F-35 program does not allocate a specific amount of work and cash for Canadian aerospace firms. Instead, it allows Canadian companies to bid on the world-wide contracts associated with the fleet.

Because Canada is still a partner in the program, companies in this country have so far won about $750 million in related production contracts.

The Industry Canada briefing says any replacement aircraft would have an impact on Canadian firms, but noted “not all companies in Canada are equally positioned to take advantage of industrial opportunities related to available fighters.”

One of the potential F-35 rivals is the Boeing Super Hornet, which is a significantly upgraded version of the F-18.

In an interview last month with The Canadian Press, Roberto Valla, vice president of global sales for Boeing in Canada, said the company already has long-standing relationships with suppliers in the country and would have no problem delivering significant industrial benefits.

He said the company has a track record of delivering on its commitments with $6.5 billion delivered for existing contracts and another $3.1 billion in obligations still to come.

Valla also touted the immediate benefit of selecting the Super Hornet, saying it is cheaper to operate and maintain.

—With files from Andy Blatchford