The premier and her team said that if New York officials don't vote down the protectionist budget provisions they will consider "all options" in response, including putting a stop to buying from New York companies 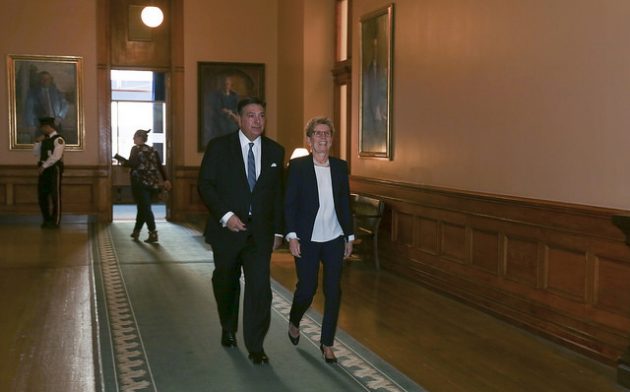 WINDSOR, Ont.—Ontario Premier Kathleen Wynne says she hopes New York State legislators will vote against Buy American provisions in their budget, and warns that if they don’t, she’ll consider “all options” in response.

One such option would see the provincial government respond in kind and stop buying from New York companies.

Economic Development Minister Brad Duguid says it is in New York’s interest to prevent that from happening because the state’s companies do significant business with the Ontario government.

He adds they wouldn’t want to be prevented from bidding on $160 billion of provincial infrastructure projects coming over the next 12 years.

But Wynne says she hope it won’t come to that—she’d prefer to see Ontario exempt from the Buy American policy, which is expected to come to a vote as early as Friday.

Wynne and Duguid made their comments Thursday in Windsor.

Wynne’s government has been actively lobbying state politicians against protectionist policies and stepped up those efforts since the election of President Donald Trump. Ontario’s message has been that free and open trade between Ontario and neighbouring U.S. states benefits both sides of the border, and protectionism will hurt both sides.

“While we’re encouraged by the response that the ministers received in Albany and we’re hopeful that New York State will make the right decision, we are considering all reasonable options to protect Ontario jobs in the face of Buy American policies,” Wynne said.

Governor Andrew Cuomo’s New York Buy American Act would require all state entities to buy from American companies for all procurements greater than US$100,000.

That would “seriously undermine” its relationship with Ontario, Wynne warned.

“Should that not occur, then I think what the Premier is saying is make no mistake about it, we’ll do what we need to do to stand up for the businesses and workers in Ontario,” said Duguid.

“This premier is building transit, and roads, and bridges, infrastructure like no one has in the history of this province,” he continued.

“A company like Alstom in New York has engaged in very important contracts for our transit system builds. We’ve got $160 billion in investment coming in the next 12 years and I expect New York companies are going to want to have access to that as well.”