Construction on the new light rail line is expected to get underway next year. It will run from Lake Ontario to Brampton, cutting through downtown Mississauga along the way 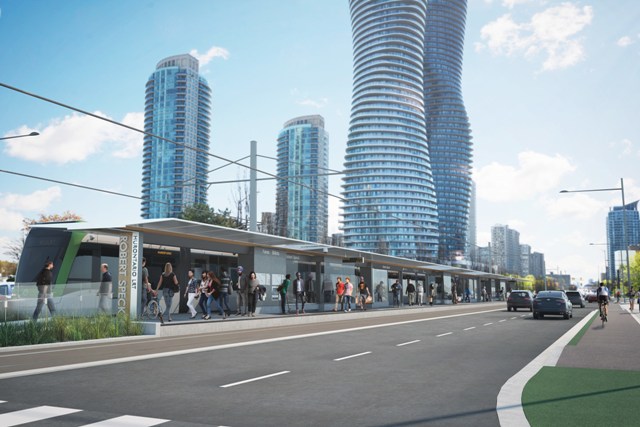 A rendering of the Robert Speck transit stop in Mississauga, Ont. The LRT will include 22 surface stops along a 20-kilometre route. PHOTO: Infrastructure Ontario

MISSISSAUGA, Ont.—Ontario is one step closer to putting shovels in the ground on a new public transit line in the Toronto suburbs.

Infrastructure Ontario and transit agency Metrolinx said June 6 they have shortlisted three consortia to submit proposals to build the Hurontario Light Rail Transit project, which will run from the Port Credit GO Station near Lake Ontario to Gateway Terminal in Brampton, cutting through downtown Mississauga along the way.

“We are another step closer to greatly improving transit in Peel Region,” John Jensen, president and CEO of Metrolinx, said in a statement. “This project will be a key part of our regional transportation network, providing residents and businesses in Mississauga and Brampton with a fast, reliable, and convenient way to get where they need to be.”

CLICK to enlarge. A map of the new LRT. PHOTO: Infrastructure Ontario

The three consortia to emerge from the Request for Qualification stage are: Hurontario Light Rail Connection Partners, Mobilinx, Trillium Transit Partners. A complete list of each consortium’s team members is available here.

With a construction start expected next year, Infrastructure Ontario and Metrolinx will now select a final construction team from the three finalists.

The new light rail system will eventually include 22 surface stops and connect with local and regional rail and bus lines in both Mississauga and Brampton. It’s slated to open in 2022.