The province says it will pick up approximately half the bill for the new bridge; with federal financing, construction could get underway in 2019 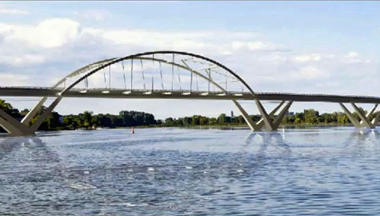 A rendering of the the Third Crossing bridge. The project is currently in the design phase. PHOTO: City of Kingston/YouTube

KINGSTON, Ont.—A provincial contribution of $60 million for a new bridge across the Cataraqui River in Kingston, Ont. has brought the proposed project one step closer to fruition.

The Ontario government said June 13 it will pick up approximately half the bill for the Third Crossing project, which is estimated to cost $120 million.

The new bridge will add a third link across the Cataraqui, which runs through Kingston just east of the city’s downtown. The LaSalle Causeway, originally built in 1917, currently bridges the river near downtown, while Highway 401 crosses the river north of the city.

The Third Crossing is expected to be built between the two existing bridges—after city studies determined the best plan for a new bridge would be to link John Counter Boulevard with Gore Road on the eastern side of the Cataraqui.

The province says the project will decrease congestion on the LaSalle Causeway and give emergency vehicles another route into the eastern Kingston.

Ontario now plans to work with the city to secure federal funding for the project.

Assuming Kingston can secure further financing, construction on the new bridge is expected to get underway in 2019 and the Third Crossing will open to traffic in 2023.