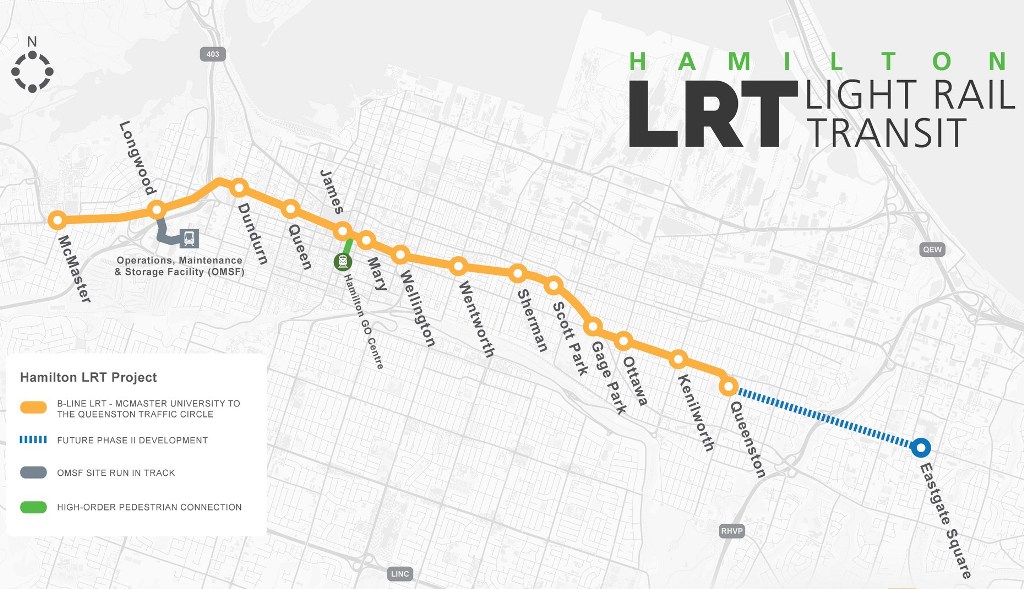 Infrastructure Ontario and Toronto-area transit agency Metrolinx issued a request for qualifications for the $1 billion Hamilton, Ont. light rail transit project Feb. 2., calling on construction teams to submit their credentials in order to pre-qualify for the next stage of the project.

The province plans to have shovels in the ground by 2019 and expects the rail line will take five years to build.

“This is an exciting first step in the Hamilton LRT procurement process,” Bruce McCuaig, president and CEO of Metrolinx, said in a statement. “Today marks a significant project milestone and puts Hamilton one step closer to rapid and reliable light rail transit in 2024.”

Running 11 kilometres through downtown Hamilton, the LRT will include 14 stops along the city’s Main and King Streets. It will run between McMaster University and Queenston Circle on the east side of downtown and include a connection to Hamilton GO Centre station, linking the new LRT to the rest of the GTHA.

The RFQ stage is the first step in the government’s lengthy procurement process. After pre-qualifying consortia the province will ask the construction teams to submit proposals for building, financing, operating and maintaining the new transit line.

The Hamilton LRT is just one of several light rail projects underway in the Toronto area. The province is making steady progressing on Toronto’s Eglinton LRT and recently started the procurement process for rail projects in Mississauga and North York.

Infrastructure Ontario and Metrolinx expect to complete the RFQ stage and issue a request for proposals by this summer.