Security requirements at Canadian nuclear power plants have since 2001 required an on-site, armed response force. A spokesperson for the Point Lepreau nuclear generating station says the LAVs are standard at all nuclear facilities 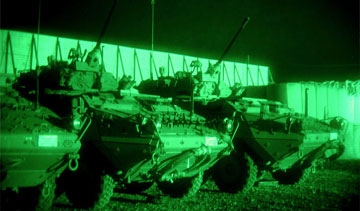 POINT LEPREAU, N.B.—A nuclear power plant in New Brunswick is in the market for a pair of large, tank-like vehicles to secure its facilities.

A spokesman for New Brunswick Power said staff at the Point Lepreau nuclear generating station near Saint John, N.B., are reviewing tenders for two new light-armoured vehicles, which typically retail for about $300,000.

Marc Belliveau said the nuclear plant is looking to replace its light-armoured vehicles after six years of patrolling the facility.

“These vehicles patrol every day, all day, and therefore receive very heavy use,” Belliveau said in an email Friday. “They are a standard part of security at all Canadian nuclear facilities.”

The call for bids was open from June 12 to 28, according to Belliveau, who said he could not provide specific details in the tender because the vehicles are used for security purposes.

Aurele Gervais, a spokesman for the Canadian Nuclear Safety Commission, said the commission ramped up security measures at Canada’s major nuclear facilities in the wake of the terror attacks in the United States on Sept. 11, 2001.

Security requirements now include a round-the-clock “on-site armed response force,” whose members are not employed by the commission, Gervais said.

He said the commission’s list of equipment for the protection of the armed response forces is classified.