TORONTO—The first Canadian-made horizontal tail assembly for the F-35A Lightning II program was successfully installed on the aircraft, according to Magellan Aerospace.

According to Magellan, the assembly, produced at its Winnipeg manufacturing plant, was shipped to Lockheed Martin’s facility in Fort Worth, Texas, where it was installed on the fighter jet.

Magellan is under contract with BAE Systems, a principal member of the Lockheed Martin-led F-35 industry team, to produce horizontal tail assemblies for the Conventional Take Off and Landing (CTOL) variant of F-35.

Magellan is expected to produce more than 1,000 sets of the components for the program an estimated 20-year period. 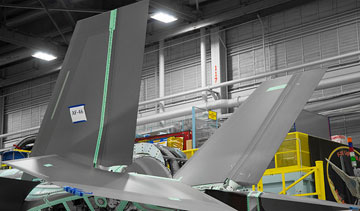 “The reports we have received from Lockheed and BAE indicate that the product we delivered to the assembly line was installed without complication,” Magellan president and CEO James Butyniec said in a release about the milestone.

In addition to the horizontal tail, Magellan has produced the vane box assemblies and transition ducts for all of the F-35B Short Take Off and Landing variants currently in the air.

Magellan’s investment in facilities, equipment and processes in support of the F-35 Lightning II program has positioned the company to realize sales approaching $2-billion over the life of the F-35 program.

Its revenues to date on the F-35 program exceed $100-million, the company announced.