Canadian government has kicked off largest military procurement project in country's history by issuing a RFP; cost for new frigates, destroyers could reach $40 billion, though host of questions remain 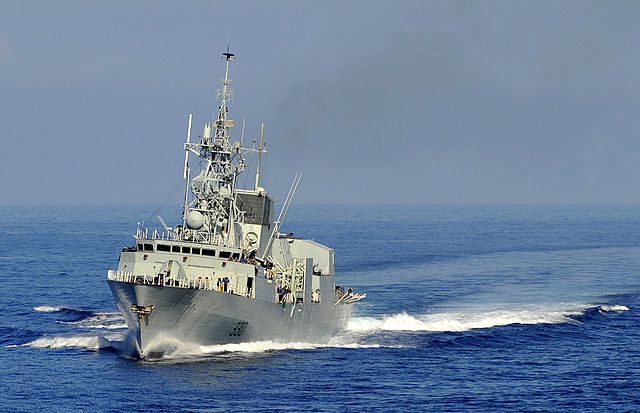 The cost to replace Canada’s Halifax-class frigates as well as its destroyers could run as high as $40 billion. HMCS Halifax pictured

OTTAWA—The federal government is in a race against the clock when it comes to building new warships for the navy, with officials conceding there’s little room for further delays or hangups in the multibillion-dollar project.

The government fired the starting gun Oct. 27 on a long-anticipated competition that will determine what vessel will replace the navy’s frigates and destroyers.

Twelve of the world’s largest defence and shipbuilding companies have been given six months to submit their designs, with a winner expected to be announced next summer and construction to begin in the early 2020s.

Public Procurement Minister Judy Foote said that by asking for a pre-existing foreign design, rather than one made from scratch in Canada, the government hopes it can shave time and money off the project.

“It’s important because we know that the navy really needs to have their warships replaced and we want to make sure that our men and women in our navy get the resources they need to do the jobs expected of them,” Foote said in an interview.

The time aspect is particularly critical.

The navy recently retired the last of its destroyers. That means fewer ships to patrol Canada’s sprawling coasts and operate overseas, as well as a shortage of air-defence capabilities until the new vessels arrive.

The government also wants to begin work on the new warships as soon as Irving Shipbuilding in Halifax finishes the last of five new Arctic patrol ships.

Officials say a gap between the two projects wouldn’t just delay delivery of the vessels to the navy, it would also cost taxpayer dollars as workers and equipment sit idle, and material costs go up.

“Our focus is a continuous-build program because (a gap) is where you really see costs escalate in shipbuilding,” said Lisa Campbell, the head of military and marine procurement at the Department of Public Procurement.

“So a continuous build is what we are about.”

But Patrick Finn, the head of military procurement at the Department of National Defence, confirmed a gap has emerged and that the government doesn’t have a lot of wiggle room for future delays.

“From a program perspective, we have not a lot of flexibility,” he said. “Right now, schedule is very important for us. There are some risks emerging that we need to deal with.”

Deciding on a final design won’t be easy.

There will be several rounds of negotiations, including a potentially fraught debate between the government and potential winner over access to the design blueprints.

Companies have pushed back on the government’s demand to have the full blueprints for whatever ship design it chooses, so the two sides have agreed that the company with the top design will negotiate with the government over intellectual property rights before a contract is awarded.

If an agreement can’t be reached, the government can go to the next company.

Officials say there will also need to be more work in terms of determining what the navy needs and what it can live without to keep costs under control.

A contract with Irving Shipbuilding to actually build the ships also still needs to be negotiated.

On the current schedule, Finn said, the first ship will be delivered in 2026.

Meanwhile, officials continued to refuse to put a price tag on the new warships, which has been billed as the largest military procurement project in Canadian history. They also wouldn’t say how many ships will be built.

The previous Conservative government had promised 15 ships for $26 billion when it announced the warship project in 2010, but naval officials pegged the cost last year at closer to $40 billion.

The government has since said it will not decide on a budget or number of ships until later.