With Boeing on the naughty list for launching a trade action against Bombardier, aerospace firms Lockheed Martin, Dassault and Saab are hoping to scoop up the coveted contract to sell Canada jet fighters 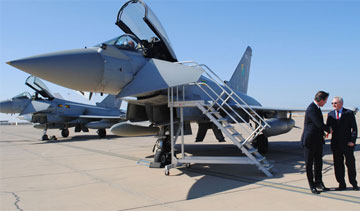 The Eurofighter Typhoon, pictured above, is built by a consortium including Airbus and BAE systems. PHOTO: BAE Systems

OTTAWA—Federal officials are expected to sit down with representatives from different fighter jet makers in Paris next week, as uncertainty swirls over the Trudeau government’s plan to buy “interim” Super Hornets.

The meetings on the sidelines of the prestigious Paris Air Show are being billed as the first step towards the eventual launch of a competition to replace Canada’s aging CF-18 fleet with 88 new fighters.

That is how many warplanes the Liberals’ new defence policy calls for Canada to buy, an increase from the 65 previously promised by the Conservatives under Stephen Harper.

The policy estimates the cost at between $15 billion and $19 billion, up from the $9 billion previously budgeted by the Tories.

But while much of the attention will be on the competition, which the government says it will launch in 2019, the companies are also expected to pitch their own ability to sell Canada “interim” jets if needed.

The Liberals previously said they needed the Super Hornets to address a critical shortage of fighter jets, referred to as a “capability gap,” until the full competition to replace the CF-18s could be run.

The government said at the time that the Super Hornet was the only aircraft that met its immediate requirements, including being compatible with U.S. fighters and not in development.

But that was before Boeing complained to the U.S. Commerce Department about Canadian aerospace firm Bombardier, sparking a trade dispute and threats from the Liberals to kill the Super Hornet deal.

The plan to purchase an interim fighter jet has been unpopular with retired military officers and defence officials as well as analysts, who have instead called for the competition to start now rather than in 2019.

A survey of 75 such experts conducted by the Macdonald-Laurier Institute and released on June 13 found that the vast majority didn’t believe there was a capability gap, and opposed the plan to buy interim jets.

But a senior government official told The Canadian Press that the Liberals have no intention of backing away from their plan to buy an interim fighter, even if it means going with a different jet.

Sources say the government has not actually approached any of Boeing’s competitors about stepping into the breach if the Liberals decide to scrap the Super Hornet deal.

Each has indicated that it is prepared to provide interim fighter jets upon request.

The government’s delegation will be led by Maj.-Gen. Alain Pelletier, head of National Defence’s fighter program, and Lisa Campbell, who oversees military procurement at the federal procurement department.

While sources say meetings with Boeing’s competitors have been set up, it wasn’t immediately clear whether the delegation would sit down with the Super Hornet manufacturer as well.

That is despite Boeing’s plan to enter the Super Hornet in the full competition to replace the CF-18s.

Public Services and Procurement Canada spokesman Pierre-Alain Bujold said in an email that details of the delegation, including its schedule for the Paris Air Show, were still being finalized.

The Liberals have cut off most contact with Boeing since the government threatened to cancel the planned Super Hornet purchase over of the company’s spat with Bombardier last month.

Boeing spokesman Scott Day said in a statement that the company continues to work closely with the U.S. Navy, through which any sale of interim Super Hornets to Canada would actually be arranged.

The government also recently paid another $30 million to remain at the table as a partner in the development of the F-35, and largely backed off its promise never to buy that stealth fighter.