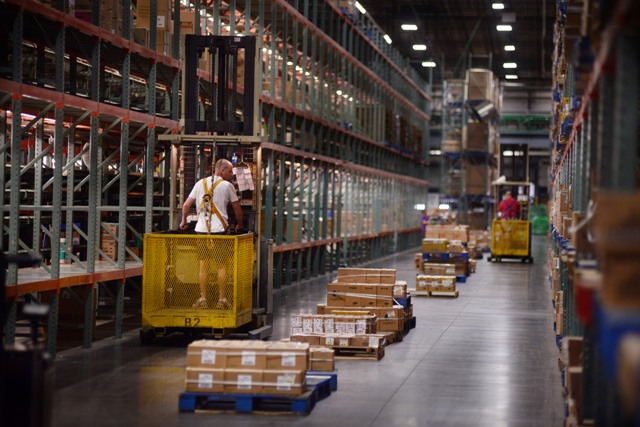 A Walmart distribution centre in the U.S. The retailer plans to retrofit the forklifts at one of its Canadian warehouses with the lithium-ion batteries. PHOTO: Spencer Tirey/Walmart

The Mississauga-based cleantech firm said the forklift battery deal is worth approximately $4.3 million and comes after the retailer and an undisclosed forklift manufacturer put the drop-in technology through extensive testing.

Walmart plans to use the lithium-ion batteries to replace lead acid batteries currently under the hoods of forklifts in one of its Canadian distribution warehouses.

“Our ceramic lithium-ion battery technology is ideally suited to intensive-use applications such as forklifts and other material handling vehicles, supporting both higher efficiency and sustainability,” Raj Das Gupta, vice-president of Business Development at Electrovaya, said in a statement.

The company offers its ELivate batteries in 24-, 36- and 48-volt variants—all are capable of fully recharging in one hour and cycling up to 9,000 times. The deal follows a similar agreement with snack food giant Mondelez International finalized this July.

Electrovaya plans to deliver the new batteries to Walmart in the first quarter of 2018.

Investors, meanwhile, sent shares soaring following the announcement. In morning trading Sept. 19, the company’s shares were trading up more than 15 per cent.