AUBURN HILLS, Mich.—In the ultra-competitive light truck segment, terms like “best-in-class” and “class exclusive” can be the difference between first and worst in the sales department.

Chrysler is hoping a combination of both those terms will help propel sales of its 2014 Ram 1500 to the top of the pile, with the automaker announcing a class exclusive diesel engine in its light-duty pickup that offers best-in-class fuel efficiency.

According to Chrysler, the 2014 Ram 1500, set to hit showrooms later this year, comes with an available 3.0-litre EcoDiesel V6 engine that delivers 240 horsepower and 420 lb.-ft. of torque.

The all-new powerplant comes mated with the TorqueFlite eight-speed automatic transmission and “is noticeably more efficient than all V6 gasoline engines in the half-ton category,” Chrysler claims. 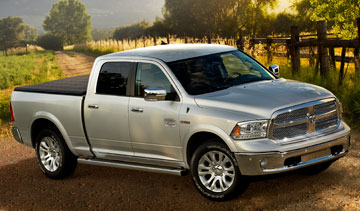 The Ram 1500 will be available with a 3.0-litre EcoDiesel V6 engine when it hits showroom floors later this year. PHOTO Chrysler

The engine is also offered in the Jeep Grand Cherokee.

Both also come mated with the TorqueFlite eight-speed transmission.

The V6 EcoDiesel-equipped model is expected to come in at a starting price of around $30,000.