Deadline to decide on Super Hornet purchase is rapidly approaching

The U.S. offer of Super Hornet fighter jets expires at the end of the year, and missing that deadline carries a risk that the price will go up or the planes will have to be delivered later 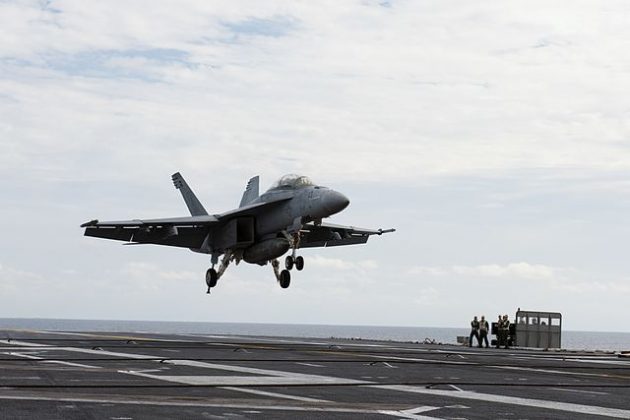 OTTAWA—The Trudeau government has until the end of the year to decide on an offer for Super Hornet fighter jets, which remain on the table despite recent escalations in the bitter feud with aerospace giant Boeing.

The U.S. government delivered a formal offer to sell the Boeing-made planes to Canada last month, after the Liberals said they were urgently needed to address a shortage of CF-18s.

But sources tell The Canadian Press that the offer for 18 Super Hornets and associated weapons and equipment, at an estimated cost of more than $6 billion, is only good until the end of the year.

The government can ask for an extension, but there is no guarantee it will be granted.

And while the U.S. could end up making a new offer if the current one expires, there is a risk that the price will go up or the planes will have to be delivered later than the government wants.

The Liberals say they are still considering whether to buy Super Hornets despite Boeing’s trade dispute with Canadian rival Bombardier.

“This allows us to make sure that we have various options,” Defence Minister Harjit Sajjan said Oct. 16, after Bombardier announced plans to sell a majority stake in its CSeries program to European rival Airbus.

“We are committed to making sure the Canadian Armed Forces has all the tools necessary.”

Canada has in fact been given longer to decide on the Super Hornets than is normal for countries that want to buy military equipment from the U.S. Formal offers are usually only good for 60 days before they expire.

But the extra time likely isn’t enough to know how Boeing’s trade dispute with Bombardier will turn out given that the case is expected to drag out at the U.S. International Trade Commission until next spring.

Matias Maloberti of LM Defense, a Virginia-based firm that specializes in brokering foreign military sales, said it’s unlikely the U.S. would ever withdraw its offer to sell Super Hornets to Canada given bilateral ties.

But much like the quote for an automobile, the price cited in the U.S. offer could change after a certain period of time.

Boeing’s production line can also only build a certain number of Super Hornets, meaning space is limited, particularly with the U.S. Navy and Kuwait both planning to buy some of the fighters.

“Extensions may be granted as long as the pricing and delivery estimates are expected to remain valid for the extended time period,” the U.S. Defense Security Co-operation Agency warns on its website.

The agency is responsible for administering the sale of U.S. military equipment to other countries.

“The ball is in Canada’s court,” Maloberti said. “And in this case, with an aircraft that is not at the peak of its production run, everything matters.”

The government said in November 2016 that they would buy 18 “interim” Super Hornets to fill a critical shortage of fighter jets until a full competition to replace Canada’s entire CF-18 fleet is held in the coming years.

Liberal officials said at the time that the Super Hornet was the only aircraft able to meet its immediate requirements.

But that was before Boeing complained to the U.S. Commerce Department that Bombardier had sold its CSeries jet liners at an “absurdly” low price with assistance from federal government subsidies.

Commerce officials have proposed a 300 per cent duty on all CSeries planes imported into the U.S., though the penalties won’t be official until a separate ruling on whether Bombardier hurt Boeing’s business.

The Liberals have repeatedly threatened to scrap their plan to buy Super Hornets unless Boeing drops its case, and asked Australia last month for more information about their used fighter jets.

Procurement Minister Carla Qualtrough’s office says the government expects a response from Australia by the end of the year.