Lockheed Martin has won the right to negotiate a contract to design Canada's new $60-billion frigate and destroyer fleets. But, critics are accusing the feds and their construction partner Irving Shipbuilding of favouritism 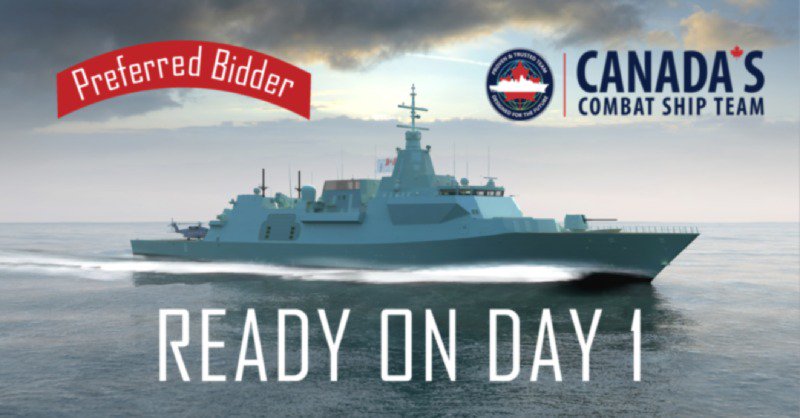 OTTAWA—The federal government and Lockheed Martin are preparing to launch high-stakes negotiations after the U.S. defence giant was given the first shot at a contract to design Canada’s $60-billion fleet of new warships.

Government officials said Friday that Lockheed’s proposal beat out two rival submissions in the long and extremely sensitive competition to design replacements for the navy’s entire frigate and destroyer fleets.

That doesn’t mean a contract has been awarded. Negotiators for both sides as well as Halifax-based Irving Shipbuilding, which will actually build the warships, must now hammer out the details—including the final cost—before a deal is formalized.

At the same time, Lockheed’s victory could be a catalyst for legal action by the other bidders after questions about why the company’s bid, which was based on the British-designed Type 26 frigate, was allowed in the first place.

Lockheed was up against U.S.-based defence company Alion, which proposed a design based on a Dutch frigate, and the Spanish firm Navantia, whose proposal was modelled on a frigate used by the Spanish navy.

The government is planning to build 15 new warships starting in the next three to four years, which will replace Canada’s 12 aging Halifax-class frigates and already-retired Iroquois-class destroyers and serve as the navy’s backbone for most of the century.

The stakes will be high for government, Irving and Lockheed negotiators, with hundreds of millions of dollars in play as well as pressure to make up lost time after numerous delays in the project.

Irving has warned that it could be forced to lay off hundreds of employees if work on the warships is not ready to start by the time it finishes building the navy’s new Arctic patrol ships in 2021 or 2022.

Patrick Finn, the Defence Department’s head of military procurement, acknowledged the need for urgency, but noted the need for care as the talks could have ramifications for the navy and taxpayers for decades.

“So it behooves us to stop and make sure we do the final checks in all of the areas,” Finn said, adding that the hope is to start construction in three to four years.

One of the key negotiating points is the amount of intellectual property that Lockheed will be required to hand over, which Ottawa wants so it can operate and maintain the vessels on its own after they are built.

The intellectual-property issue has proven contentious in the past, which is why the government and industry agreed to wait until now to iron out the details.

The government has reserved the right to walk away from the talks if Lockheed drives too hard a bargain and negotiate instead with the second-place bidder, which was not identified. Officials hope that won’t be necessary.

The bid by Lockheed, which also builds the F-35 stealth fighter and other military equipment, has been contentious from the moment the design competition was launched in October 2016.

The federal government had originally said it wanted a “mature design” for its new warship fleet, which was widely interpreted as meaning a vessel that has already been built and used by another navy.

But the first Type 26 frigates are only now being built by the British government and the design has not yet been tested in full operation.

There were also complaints from industry that the deck was stacked in the Type 26’s favour because of Irving’s connections with British shipbuilder BAE, which originally designed the Type 26 and partnered with Lockheed to offer the ship to Canada.

Irving, which worked with the federal government to pick the top design, also partnered with BAE in 2016 on an ultimately unsuccessful bid to maintain the navy’s new Arctic patrol vessels and supply ships. That 35-year contract ended up going to another company.

Irving and the federal government have rejected such complaints, saying they conducted numerous consultations with industry and installed a variety of firewalls and safeguards to ensure the selection process was completely fair and unbiased.

“The selection of Lockheed Martin as the preferred bidder was based on the merits of the final bids,” Irving spokesman Sean Lewis said in an interview.

“The project is the largest and most complex in Canadian government history, and given that fact, extraordinary steps have been taken to ensure it is conducted in an open, fair, and transparent manner.”

Several industry insiders, however, predicted Lockheed’s selection as the top bidder combined with several changes to the competition after it was launched, including deadline extensions, would spark lawsuits from the other bidders.

Government officials acknowledged the threat of legal action, which has become a favourite tactic for companies that lose defence contracts, but expressed confidence that they would be able to defend against such attacks.

“Part of the work that we’ve done as we’ve unfolded this is to actually mitigate some of the legal risk by making sure that we were listening to industry feedback throughout the process,” Finn said.

“We don’t make all our decisions based on legal risk, but we don’t ignore it either.”

—With files from Michael Tutton in Halifax