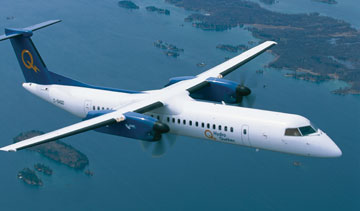 The five new turboprops are worth US$162 million at list prices. PHOTO Bombardier Aerospace

It did not disclose the customer.

The fresh order comes ahead of the high-profile Paris Air Show later this month, where the Canadian plane and train maker will be hoping to book new orders for both its regional turboprop and its new CSeries jets.

Bombardier delivered the first CS100 to Swiss International Airlines last summer and the first larger CS300 to airBaltic in the fall. The company had handed over 13 of the new jets to customers as of June 1, though questions remain about new orders for the jets, as well as a U.S. investigation into the program.

U.S. plane maker Boeing launched a complaint against Bombardier in April, claiming the Montreal-based company has received unfair government subsidies for its CSeries program. This week, the U.S. International Trade Commission said there is “reasonable indication” the U.S. industry could be threatened by the alleged unfair prices and the U.S. Department of Commerce will continue its investigation as a result.