Bombardier lands deal with Philippine Airlines for up to 12 Q400s

Agreement for the dozen turboprops is valued at $383.8 million at list prices 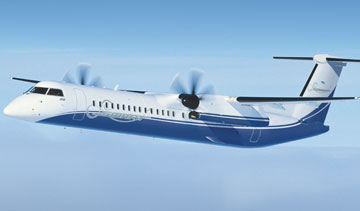 TORONTO—Bombardier Inc. says Philippine Airlines has signed a letter of intent to acquire up to 12 of its Q400 aircraft.

The Canadian plane and train maker’s Commercial Aircraft division did not disclose a purchase price for the dozen 86-seat turboprop aircraft, but the planes are valued at $383.8 million at list prices.

Philippine Airlines is the country’s flag carrier and serves more than 70 destinations at home and around the world.

Bombardier says about 190 of its aircraft are either in service or have been ordered by airlines in the Asia-Pacific region.

Meanwhile, after premiering the smaller of its CSeries jets with Swiss Air Lines earlier this year, the Montreal-based company is preparing to deliver its first CS300 to airBaltic.