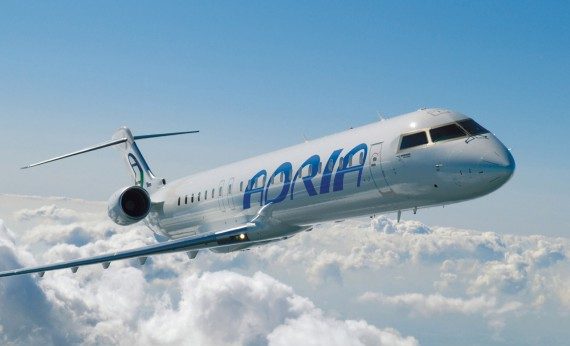 The deal for up to 10 Bombardier CRJ900s is valued at up to US$467 million. PHOTO: Bombadier

MONTREAL—Bombardier’s Commercial Aircraft division has logged its second multi-million-dollar order in as many days.

The plane maker has announced a subsidiary of Dartmouth, Nova Scotia-based Chorus Aviation Inc. has signed a firm order for five CRJ900 regional jets. Valued at US$229 million at list prices, the order could rise to $467 million if all options are exercised.

The new planes will be operated by Jazz Aviation LP, which flies under Chorus’ Air Canada Express banner.

“The addition of these new CRJ900 aircraft will continue Jazz’s fleet renewal and growth program that began in 2011, and provide unit operating costs that are amongst the lowest of any regional aircraft,” Joseph Randell, president and CEO of Chorus, said. “These efficient aircraft are an important component of our cost reduction plans and will be an outstanding complement to our exclusive fleet of Bombardier turboprops and regional jets.”

In addition to the new aircraft deal, Jazz plans to reconfigure its current fleet of 16 Bombardier CRJ705s into CRJ900 aircraft with 76 seats with the Bombardier’s assistance.

The deal comes one day after the Montreal-based company won a four-plane order from Trident Jet (Jersey) Ltd..