by Jon Gambrell And Nasser Karimi, The Associated Press  June 21, 2016

The multibillion-dollar order would be the largest deal between Iranian and American businesses since the 1979 U.S. Embassy takeover in Tehran 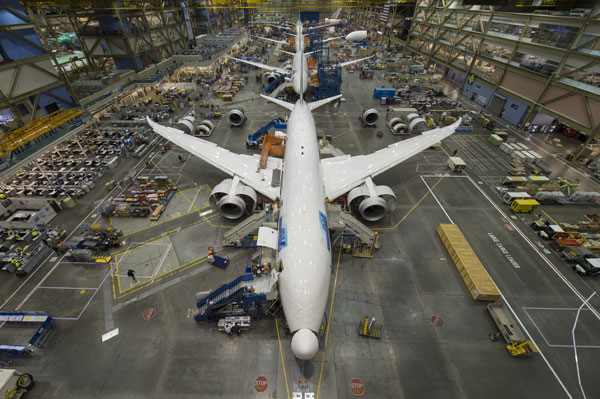 Boeing issued a statement saying it signed the Iran Air agreement”under authorizations from the U.S. government following a determination that Iran had met its obligations under the nuclear accord reached last summer.” PHOTO Boeing

DUBAI, United Arab Emirates—Boeing Co. said June 21 it signed an agreement with Iran Air “expressing the airline’s intent” to buy its aircraft, setting up the biggest business deal between the Islamic Republic and America since the 1979 U.S. Embassy takeover in Tehran.

Already, an Iranian official has suggested his country as a whole may purchase US$25 billion in airplanes from Chicago-based Boeing, welcome news to workers on its massive assembly line north of Seattle and company stockholders.

However, the long-standing enmity between the U.S. and Iran, as well as other sanctions, still could complicate any agreement—even after last year’s nuclear deal.

Boeing issued a statement to The Associated Press saying that it signed the Iran Air agreement “under authorizations from the U.S. government following a determination that Iran had met its obligations under the nuclear accord reached last summer.”

Iran Air, the country’s national carrier, said this week it wants to buy new generations of the Boeing 737, as well as the 300ER and 900 version of the Boeing 777.

Earlier Tuesday, Iran’s Transportation Minister Abbas Akhoundi said possible deals between the Islamic Republic and Boeing could be worth as much as $25 billion, on par with the country’s earlier agreement with its European rival, Airbus. Iran also has ordered 20 airplanes from French-Italian aircraft manufacturer ATR.

“The initial talks were held and I can say Boeing is negotiating with the U.S. officials and possibly the amount of our purchase is equal to Airbus,” Akhoundi said.

If the deal goes through, he said the first Boeing plane could arrive in Iran in October.

The overall size of the proposed Boeing sale to Iran remains unclear. Ali Abedzadeh, the head of Iran’s Civil Aviation Organization, was quoted Sunday by the state-run IRAN newspaper as saying the sale would involve 100 Boeing aircraft, something the manufacturer has declined to discuss.

Boeing has been cautious about entering Iran’s market as other sanctions remain in place against Tehran. American officials had said as recently as last weekend that the sale would need permission from the U.S. Treasury.

It’s unclear what changed in the last few days. Treasury officials could not be immediately reached for comment. It is likely Boeing may run the sale through an overseas subsidiary and use a currency other than U.S. dollars in order to avoid running afoul of American laws.

Iranian airlines have some 60 Boeing airplanes in service, but most were purchased before the 1979 Islamic Revolution that ousted Shah Mohammad Reza Pahlavi and brought Islamists to power.

Out of Iran’s 250 commercial planes, 162 are flying while the rest are grounded due to lack of spare parts, Akhoundi said Tuesday. Parts and servicing remained nearly impossible to get while the world sanctioned Iran over its contested nuclear program.

Included in last year’s nuclear deal, which limited Iran’s uranium enrichment in exchange for sanctions to be lifted, is approval for airline manufacturers to enter the Iranian market. However, American lawmakers have warned Boeing not to do business there as the Iran deal remains a hot topic in the ongoing presidential election.

At issue as well is Iran and America’s long-standing suspicion of each other as the two countries haven’t had direct diplomatic relations since 1979.

For Americans, it is the U.S. Embassy takeover during the Islamic Revolution and its blacklisting of Iran as a state sponsor of terrorism. For Iranians, it is the American- and British-backed 1953 coup that installed the shah, as well as the U.S. Navy’s 1988 downing of an Iran Air commercial jet heading to Dubai.

“This is a very important and necessary task, but is it a priority?” Khamenei asked, according to a transcript on his official website. “Imagine that we buy 300 airplanes. It is not clear whether this is a priority or not. This should be studied.”