The new Big Chaudière Dam, on the French River near North Bay, Ont., opened August 14 after construction finished in October of last year. The new dam is replacing structures built in the 1910s 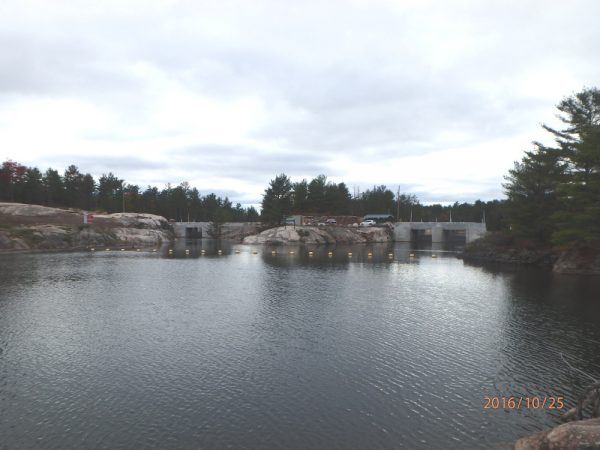 The newly constructed Big Chaudière Dam was opened August 14. The complex, consisting of a south channel dam and a north channel dam, is one of three facilities that control outflow from Lake Nipissing into the French River. PHOTO: Public Services and Procurement Canada

The Big Chaudière Dam is one of three dams that control the outflow from Lake Nipissing. It is essential for maintaining the lake’s water level and for regulating the flow of water into the 105-kilometre-long French River.

The new dam, which consists of a south channel and a north channel structure, replaces dams built between 1910 and 1916.

During construction, the new dams were built slightly downstream from the original Big Chaudière dams. The old dams were then removed.

Hatch Ltd. completed the design and engineering work for the project and EBC Inc. was tasked with building the dams. Construction began in 2012 and was completed in October 2016.

Public Services and Procurement Canada says the new dam complex will ensure that the tourism industry in and around the French River will continue to attract people from across Canada.