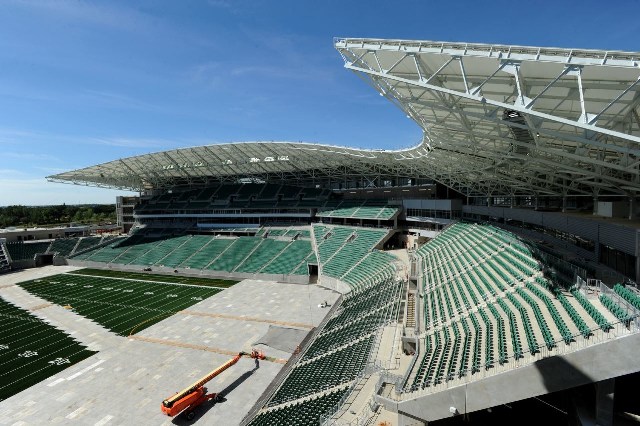 The new stadium will seat 33,000 and become the first CFL field to be lit with LEDs. PHOTO: City of Regina

REGINA—More than 38,000 cubic metres of concrete has been poured and about 33,000 seats installed at the new stadium that will be the home of the Saskatchewan Roughriders football club.

The $278-million Mosaic Stadium in Regina has officially marked what is called substantial completion, just over two years from the ground-breaking in June 2014.

Mazurak said a lot of work went into researching and building the state-of-the-art facility. Developers looked at upwards of 30 football and baseball stadiums, as well as hockey arenas, across North America to gather the “best-of-the-best” ideas.

“And when you talk to our football folks and you listen to what they have to say about our locker room facilities—second to none,” said Mazurak, who played wide receiver and slotback from 1973 to 1981.

The old bench-style seating, where fans squished together with less than 46 centimetres each, has been replaced with wider seats that include armrests and cupholders.

The new stadium has four large locker rooms in addition to one dedicated to the Roughriders. There are also nine smaller locker rooms for coaches, the cheer team and Gainer the Gopher, the Rider mascot.

It’s the first stadium in the Canadian Football League to have LED lighting. There are 400 fixtures to light up the field.

“It’ll help with our recruiting, our coaching, all of the above,” said Mazurak.

The main scoreboard still needs a video screen, and some light fixtures and Wi-Fi boxes also need to be installed.

The Riders are to move into the stadium next season, but the facility will get its first test on Oct. 1 when the University of Regina Rams play the University of Saskatchewan Huskies in a Canadian Interuniversity Sport Canada West football game.

The new Mosaic Stadium will replace the old Mosaic Stadium, which originally started as a rugby field in 1910 and, despite undergoing several upgrades over the years, is showing its age.

“You know, the old girl was just falling apart and the concrete was just not like it should be. It was unsafe, really, to go on in the future,” said Mazurak.