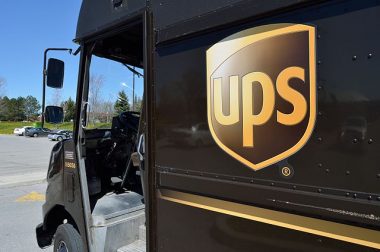 The company plans to add more alternative fuel and advanced technology vehicles to its fleet while increasing its reliance on renewable energy sources.

UPS says the goals support its commitment to reduce its absolute greenhouse gas (GHG) emissions from global ground operations 12 per cent by 2025.

“Because of our size and scale, we know our commitments can shape markets, advance technologies and be a catalyst for infrastructure investments,” said David Abney, UPS chairman and CEO.

UPS has a goal that 25 per cent of the electricity it consumes will come from renewable energy sources by 2025, a large increase from 0.2 per cent in 2016.

In addition, by 2020 UPS plans that one in four new vehicles purchased annually will be an alternative fuel vehicle, up from 16 per cent in 2016.

The company also makes use of low-carbon fuels like renewable diesel and renewable natural gas, and has set a new goal that by 2025, 40 per cent of all ground fuel will be from sources other than conventional gasoline and diesel, an increase from 19.6 per cent in 2016.

In Canada, the company aims to have 50 per cent of its fleet running on alternative fuels by 2018.