67 rail cars were pushed off the tracks by 120 kilometre per hour winds outside Huxley, Alta; another 13 derailed on a separate train near Wainwright, Alta. 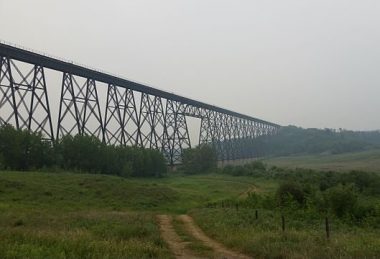 WAINWRIGHT, Alta.—Canadian National says work is continuing on cleaning up a pair of train derailments in central Alberta during the windstorms that swept through parts of the Prairies earlier this week.

Train traffic resumed Oct. 18 near Huxley, Alta., where a freight train lost 67 of its cars on Tuesday as winds gusted to 120 kilometres an hour.

Those cars were removed and repairs to the tracks completed by 10 a.m.

CN said there were no spills, leaks of dangerous goods or injuries.

Less than an hour after that incident, 13 cars of a westbound train derailed on CN’s Fabyan trestle bridge west of Wainwright.

CN said a locomotive on the end of the train was still upright on the bridge, although a set of wheels had come off the tracks.

As of Wednesday, CN crews were working to remove the cars from the embankment and the locomotive from the bridge, which was also scheduled to be inspected.

As work is being carried out, the rail line between Edmonton and Saskatoon will be out of service. Trains are being re-routed onto CN’s east-west Prairie North Line while the situation is handled.

—With files from CTV Edmonton