Toyota launches production of new Corolla, Tundra in Canada, US

All-new 2014 Corolla began rolling off line in Cambridge, Ont., ahead of September launch

TORONTO, Ont.—Production is underway in Cambridge, Ont., and in the United States on redesigned versions of a pair of popular Toyota vehicles.

According to the automaker, the all-new 2014 Corolla began rolling off the Toyota Motor Manufacturing Canada, Inc. (TMMC) line in Cambridge, Ont., as well as in Mississippi ahead of the sedan’s launch in September.

Toyota also announced production of its all-new full-size 2014 Tundra got underway this week in Texas.

Toyota’s Cambridge, Ont., plant has built the Corolla for 25 years—since 1988.

TMMC also builds the Lexus RX350 and the Toyota RAV4, RAV4 EV and Matrix for the Canadian market.

Annual capacity at the plant is 470,000 vehicles and it employs approximately 7,000 people.

The Mississippi plant initially began production of Corolla in November 2011, and has an annual capacity to produce 160,000 vehicles and employs nearly 2,000. 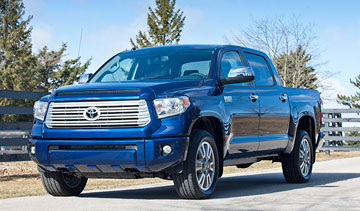 The redesigned 2014 Toyota Tundra is available with the choice of two i-FORCE V8 engines. PHOTO Toyota

The plant also builds the mid-size Tacoma pickup and has an annual capacity of 200,000 trucks.

Corolla engines are built at the automaker’s Buffalo, W. Va., engine plant, while Tundra engines are produced in Huntsville, Ala.

Cylinder heads and blocks for those engines are produced at both of Toyota’s Bodine Aluminum castings plants, located in Troy, Mo., and Jackson, Tenn.