The company has been using the same lids for 20 years despite consumer complaints that they leak, but that's about to change 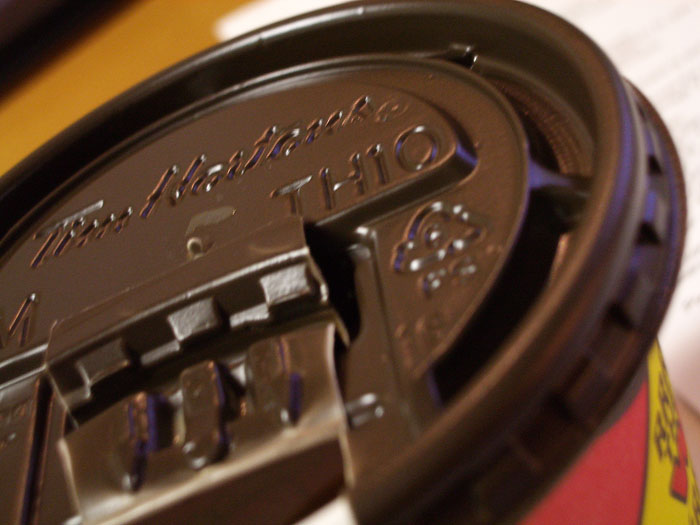 TORONTO—The president of Tim Hortons is fed up with the leaky brown tops on its coffee cups that haven’t changed a bit in 20 years—so much that he pushed the company to turn over a new leaf—literally.

Alex Macedo said Thursday that six of the brand’s locations are experimenting with more environmentally-friendly lids emblazoned with a maple leaf, adding they have been rigorously tested by thousands of people who climbed hundreds of stairs and drove plenty of kilometres with cups in hand to design a cap that will cut down on the leaking.

“If we don’t make these adjustments, we will fall back in time,” Macedo said.

“The only people who are going to be pissed off are dry cleaners and car-washing companies. They will wash fewer shirts and fewer cars.”

The lid change is just one aspect of the company’s plan to admit mistakes, some of which caused it to fall behind competitors, and make significant changes to win over consumers and franchisees alike.

Macedo and Duncan Fulton, the chief corporate officer at Tim Hortons’ parent company Restaurant Brands International, said in a meeting with The Canadian Press that customers will soon see new packaging, marketing campaigns and an emphasis on being environmentally friendly.

The initiatives are part of a raft of changes the company recently announced including all-day breakfast, a kids menu, delivery, digital kiosks and a loyalty program.

They’re the product of hours of meetings the executives had with franchisees, feedback they received from customers and gripes they’ve heard from their top ranks.

“He is (saying) functionally this is the worst way in the world to serve someone a doughnut with a fresh topping, so packaging has to get at (the) environment, function and design.”

He and Macedo said the pressure to change packaging has also mounted in recent months as environmentalists have pushed restaurants to ditch the use of plastic straws unless individual customers ask for them. Tim Hortons most recently that it is “actively reviewing” the use of straws.

Macedo doesn’t know which kind of packaging environmentalists will turn their attention to next, but said “we need to be ahead of whatever is next.”

That includes looking beyond plastic to the brand’s perception, which came under fire in recent months because of a dissident association, which claims to represent at least half of Tim Hortons franchisees.

The Great White North Franchisee Association has publicly argued with Tim Hortons over everything from alleged misuse of a national advertising fund to cuts to employee benefits after Ontario’s minimum wage hike, but Macedo has previously vowed to patch things up.

“We think it is not wise to drag the brand through the mud in the public eye because there are 1,500 families that depend on the brand to make a living,” Macedo said, emphasizing that his focus is on keeping franchisees profitable and customers happy.

He aims to do that with a new marketing plan he hopes to roll out later this year with a focus on true stories, including one about a Kenyan hockey team that played hockey with little equipment at a mall and has embraced the brand so fervently that Tim Hortons will fly the players over to skate with NHL stars.

Another will feature a story Tims staff stumbled across about a girl with a hearing impairment who often heads to Tim Hortons after school with friends. She used to have a hard time communicating that she wanted to order a doughnut or hot chocolate.

“It was wintertime and she would blow on the glass and write hot chocolate so the (Tim Hortons staff) would know. The next week (she) came in the lady that had served her had on her own learned how to sign hot chocolate and doughnut,” said Fulton.

“They are at a Tim Hortons today shooting the story with the actual lady (and girl). It is what the brand is all about.”