The company, which manufactures cargo planes powered by buoyant gas and solar panels, is working to create a carbon free shipping network in the country's most northerly and remote regions 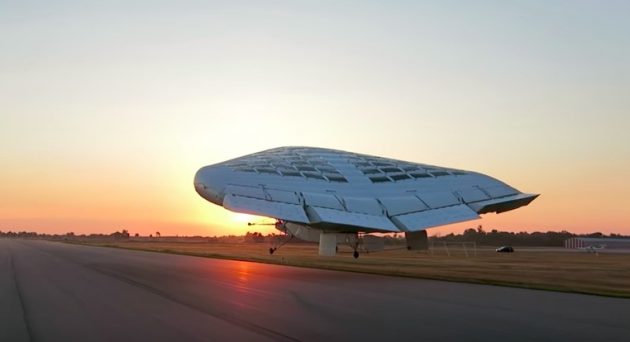 The company is working with Defence Research and Development Canada (DRDC), a research agency of the Department of National Defence, and the project is being funded by the federal government’s Build in Canada Innovation Program.

Solar Ship says this marks the first demonstration flight for the Wolverine, a 50-metre aircraft designed to carry 5000 kg of cargo, which will feature amphibious capabilities and the ability to transport cargo loads that bush planes cannot carry.

“We knew Solar Ship’s hybrid aircraft platform has the potential to lift a great deal of cargo. Today, I saw an extremely well-trained team fly a stable, controllable aircraft. I have many years of experience flying in Canada’s North and I’m excited to work with Solar Ship to create a robust, fossil fuel free transport and logistics platform that will change the way we connect our North,” said DRDC’s Vaughn Cosman.

The Wolverine will be further tested for a number of capabilities including cargo, long endurance surveillance and reconnaissance, and low speed search and rescue.

“We agreed to celebrate Canada’s 150th with DRDC early by showing what the Wolverine aircraft platform can do for connecting Canada’s North. DRDC has been a fantastic partner helping us define what we need to do to create a robust platform for the North,” said Jay Godsall, Solar Ship’s CEO.

Godsall continued, “Fossil fuels are an economic and environmental trap for the North. They can be replaced. A new generation of northern people can make this shift. We need to demonstrate these systems are robust enough for the North and DRDC is the ideal partner to accomplish this.”

Solar Ship’s cargo planes gain lift from a combination of aerodynamics and buoyant gas, like blimps, and derive and sustain power from onboard solar panels. The company says these aircraft can go places where trucks, ships and other planes cannot, taking off and landing in fields, mud, grass, dirt and water.

The company is also planning to establish a shipping network in Western China.