German fertilizer company K+S AG said it expects the mine near Bethune, Sask., will hit its targeted production capacity of two million tonnes by the end of 2017 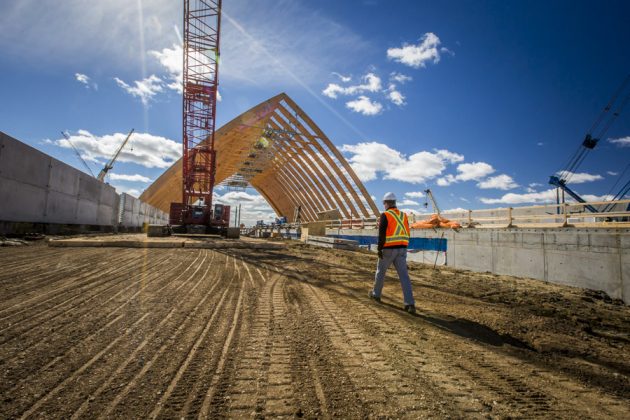 BETHUNE, Sask.—The first tonne of marketable potash is expected to be produced at the end of June from the first new mine in Saskatchewan in more than 40 years.

After five years of construction, German fertilizer company K+S AG is opening the new mine near the village of Bethune, about 70 kilometres north of Regina.

“To tell you the truth, we made the investment decision at a time when prices were significantly higher,” Norbert Steiner, the CEO of K+S AG, said Tuesday at the opening ceremony.

“But when you are on the road to build such a big plant, you are well advised that you continue the building of the plant until it is finished,” Norbert said.

“But still, we are of the opinion that the cost that we will have for the production of our products here in Saskatchewan will be significantly lower compared to the prices that we have right now in the industry and, therefore, we foresee that we have a positive EBITDA (earnings before interest, taxes, depreciation and amortization) already in 2018 and of course the better years will come afterwards.”

The company said it expects to achieve its desired production capacity of two million tonnes by the end of this year.

The Bethune mine, which is a solution mine, is the largest single project in the history of K+S.

Solution mining is the process of mining underground water-soluble minerals by dissolving the minerals with water. The water-mineral solution is then extracted from bore holes that go about 1.5 kilometres underground and the minerals are recovered from it.

Saskatchewan Premier Brad Wall says the mine impact will be felt in the province.

“It consolidates our position as an international leader in potash. But think of 400 permanent jobs, good jobs … and then the spinoffs that come from a project this size are huge for the province,” Wall said.

K+S said the first train shipment of potash will head from the mine to its port facility in Vancouver. From there, it will be exported to customers mainly in South America and Asia.

Canadian Pacific Railbuilt a 30-kilometre route to the mine site. President and CEO Keith Creel said it was “a monumental task” because the project required CP to move 9.7 million cubic metres of earth.

“To think it was done in, effectively about four years, is quite remarkable,: Creel said. ”It’s an engineering feat in and of itself.“

K+S is the world’s fifth largest producer of potash products. The company’s 2016 annual report indicates it had a share of approximately eight per cent in global potash sales volumes.

Steiner said K+S Canada will not join Canpotex because it would be competing with its parent company K+S AG.

“Because we are producing in Germany and will continue to do that, we might be active in Brazil, for example, with our German staff and then we are competing against Canpotex, including our own, so this is from a marketing and sales perspective, not the right way to go,” he said.

Potash prices have been under pressure because lower crop prices weighed on demand, while potash supplies increased.

K+S has said it expects demand to grow because of a growing global population. More people will need to be fed and that will mean more fertilizer will be needed to help produce that food.