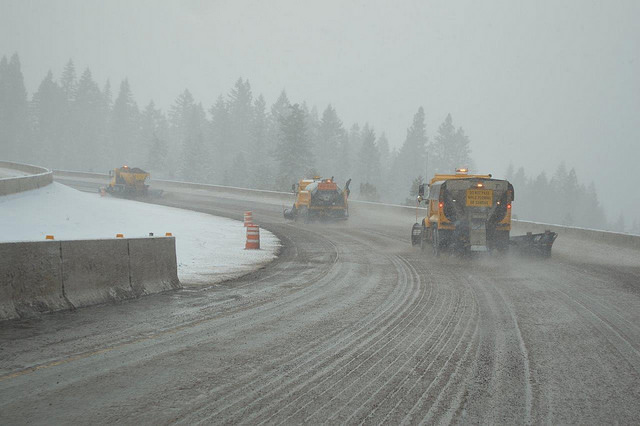 The study looked at more than 300 lakes across North America, gauging the impact road salt is having on chloride levels. PHOTO: Oregon Department of Transportation/Flickr

TORONTO—A new study suggests the use of road salt is posing a rising threat to freshwater lakes in parts of North America, including Ontario.

The research, published in the Proceedings of the National Academy of Sciences, predicts thousands of lakes will contain too much salt to sustain their current levels of aquatic life if current road salt trends continue over the next 50 years.

Lakes in more remote areas did not record the same chloride increases.

In Ontario, for instance, Lake Simcoe’s chloride levels have climbed five-fold in the past 10 to 20 years, while those in the less urbanized northwest region of the province have stayed relatively stable and well below the EPA’s threshold of 230 millilitres of chloride per litre of water.

That threshold, according to lead researcher Hilary Dugan of the University of Wisconsin, illustrates exactly how destructive excessive chloride levels can be for freshwater ecosystems.

“It’s about one teaspoon in a five-gallon bucket,” Dugan said in a telephone interview. “We’re talking about pretty low concentrations. So when you think about the amount of salt that you see lying around on the sidewalk, it doesn’t take a lot to push these lakes to concentrations where we’re going to start seeing ecological changes. And we’re also going to start tasting the salt if it’s our drinking water.”

Dugan said researchers found that the lakes in their sample were at greater risk of elevated chloride concentrations if they had more than one per cent of the surrounding area covered by an impervious surface such as concrete.

Dugan said that surface would prevent road salt from being absorbed into the surrounding soil, leading to immediate run-off into a nearby body of water

Dugan said the presence of a single road within 500 metres of a lake was a strong predictor of elevated chloride levels in that body of water.

She attributes many of the chloride spikes to road salt, a substance the study suggests has made its presence felt in North American waterways in recent decades.

The report said 18 million metric tons of road salt were being sold in the United States by the end of the 1990’s.

Canada listed road salt as a toxic substance in 1999, yet the study said 5 million metric tons of it were applied to national roadways between 1995 and 2001.

Dugan said research on Canadian lakes was limited, saying lakes in Quebec and the Maritimes could not be included in the study due to lack of data.

Researchers did make use of figures available from the Experimental Lakes research area in northwestern Ontario and found those numbers illustrated the report’s overall findings.

Data from four lakes in the region included in the sample showed stable, low chloride concentrations well shy of the EPA’s threshold.

Dugan said those lakes are all located in remote areas without impervious surfaces within a 500 metre range of the shore.

In Lake Simcoe, however, the numbers told a different story.

The lake is situated in a more populous and urbanized area of southern Ontario, which Dugan said likely contributed to a steady increase in chloride levels. She said the amount of chloride in the water had jumped “five-fold” in the past 10 to 20 years.

Dugan said there’s a need for more long-term environmental data across many jurisdictions in order to have a complete picture of the state of freshwater lakes.

The issue of road salt, she said, is one that could be reversed if scientists have enough warning.

“You can flush it out,” she said. “As we improve management practices, we have the potential to remediate these lakes. In some cases quickly, depending on their size.”