Rise of the roundabout: intersection replacement rolling out across Canada 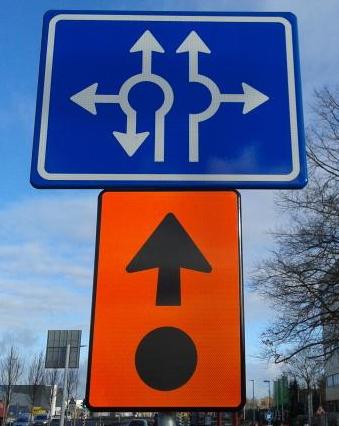 Roundabouts have been common in Europe for decades, but have only been slowly adopted in North America. PHOTO: FakirNL, via Wikimedia Commons

OTTAWA—They evoke some of the world’s most impressive crossroads—the Place de l’Etoile in Paris, Manhattan’s Columbus Circle—and have a remarkable capacity to calm traffic and ease accidents.

But, as the roundabout becomes increasingly common in Canada, they can also evoke a certain panic: Confused motorists have been known to go the wrong way, fail to yield, or try to back up in them.

“We’ve observed all sorts of behaviours,” said Keith Boddy, a roundabout specialist with the Transportation Association of Canada.

“The good news is most of those incidents don’t result in serious injury or other challenges because people are going slower.”

A typical intersection creates about 32 plausible vehicle conflicts with other drivers, pedestrians and cyclists, said Ed Miska, executive director of engineering services for B.C.’s Ministry of Transportation and Infrastructure.

Roundabouts reduce that to eight conflicts, even if people still find innovative ways of getting them wrong.

Frank Swantee of St. John’s, N.L., was carrying a tonne of retaining wall bricks in the back of his pickup truck in August when he entered a newly built roundabout in the city.

“I saw someone backing up towards me,” he said in an interview. “The truck stopped on a dime. The bricks… they just kept going.”

The wrapped load smashed the back window of Swantee’s double cab, causing $6,000 in damage but no injuries.

Swantee figures the male driver, who likely didn’t realize what had happened before taking off, had backed up after trying to use a ramp that wasn’t open yet.

Boddy estimates there are now about 400 roundabouts across the country, as Canada and the U.S. slowly catch up to a roadway design that has been widespread in the United Kingdom and France for decades.

The United Kingdom has them by the thousands, sometimes with colours and local flourishes that have inspired tributes by the U.K. Roundabout Appreciation Society and other admirers.

Quebec has built around 100 of them since the late 1990s. The Waterloo Region in Ontario has about 25 and there are 33 in B.C.’s provincial highway network. Halifax has installed several in recent years, and is adding more.

Drivers unfamiliar with roundabouts can simplify what at first looks intimidating, Boddy said.

“People need to understand that across the country when you’re faced with a roundabout, just slow down, yield to the people in the circle. Those are two big keys.

“And don’t be alarmed. It’s just another piece of road.”

Signs guide drivers in one direction, counter-clockwise, with those in the circle having the right of way to those entering.

The Insurance Institute for Highway Safety, a non-profit group dedicated to reducing losses from highway crashes in the U.S., has assessed several studies of American intersections converted from signals or stop signs to roundabouts. It estimates the number of injury crashes fell between 72 to 80 per cent, while all collisions were down by 35 to 47 per cent.

Maximum speeds of about 25 kilometres an hour help ensure blunders that might cause a vicious head-on or T-bone collision at a traditional intersection become fender benders, he said from Mississauga, Ont.

“When crashes do happen, they’re low speed, side-swiping, rear end crashes,” Weber said. “People driving the wrong way—there’s definitely that, and it looks bad and people kind of go: ‘Oh my God, this is a disaster.’

“But that’s rarely a crash when it happens. Usually, everybody stops and looks at each other.”

Weber said roundabout construction is picking up in Canada, but is still a tiny fraction of the country’s thousands of intersections.

It costs about $2 million to build either a traditional signalled version or a roundabout, said Boddy, depending on local construction costs. Circular designs tend to require more land and must fit in with traffic flow, he added.

Miska said roundabouts reduce traffic queues and make U-turns easier. They’re the first option considered for new intersections in B.C., he said, but they must make sense depending on terrain and existing road works.

In St. John’s, the city offered an online educational video as the small roundabout where Swantee had his incident opened earlier this year beside a recreation centre that is now under construction. It has been viewed about 12,000 times.

“We’ve added signage and other markings on the road,” said city Coun. Danny Breen. They include YIELD painted in giant letters on the asphalt at entry points.

Breen said it has been a mostly smooth transition.

“They’re safer and I think you’re going to be seeing a lot more of them in the city.”

Narcissus Walsh, who lives two houses from the new roundabout, says he’ll avoid it when traffic is heavy.

“You’re never sure somebody’s going to yield,” he said in an interview.