Nouveau Monde says a feasibility study shows the mine and an processing plant, which the company says will employ about 130 people, will help power the EV battery sector 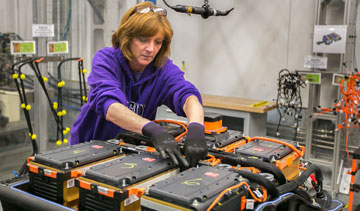 The lithium-ion battery system for the 2015 Chevrolet Spark EV is just one vehicle that’s in need of a more steady supply of the resource. PHOTO GM

Chief executive Eric Desaulniers says the study demonstrates that a section of its Matawinie project north of Montreal has the potential of becoming a reliable supplier of the material.

The firm also hopes to convert an idled panel mill into a plant to process the flake into spherical graphite to be used in EV batteries.

It estimates the plant would create up to 30 jobs on top of the 100 direct positions at the mine, starting in 2021.

China is currently the world’s largest supplier of graphite, controlling up to 70 per cent of the market. But Desaulniers said China’s product is less pure and requires washing using materials that are released into the environment.

He said carmakers are looking for a way to reduce their impact on the environment.

“We really believe that we have something that the lithium-ion manufacturers in America will like a lot,” Desaulniers said in an interview.

Graphite use by battery makers has grown by 30 per cent annually since 2013 and now trails only demand from steelmakers. Graphite is also used in electronic equipment, lubricants and pencils among other things.

Nouveau Monde hopes to get approval to open a mine in Saint-Michel-des-Saints, 160 kilometres north of Montreal. The facility would produce 50,000 tonnes a year of graphite concentrate.

Saint-Michel Mayor Rejean Gouin said there is minimal opposition to the project, with most of the community’s 2,400 residents anticipating the arrival of good jobs following a string of plant closures over the last decade.

“One hundred and thirty jobs for a small community like Saint-Michel it’s worth a lot,” Gouin said.

Building the open pit mine, with an operational life of 25 years, is expected to cost about $145 million. An expansion to double the capacity is possible if demand is proven.

The company is backed by a subsidiary of Quebec pension fund manager Caisse de depot, as well as the union Solidarity Fund, the Quebec mining exploration agency Sidex and the Desjardins financial co-operative. It plans to also seek financial support from Canadian and U.S. banks.

Unlike Timminco’s failed project in Becancour to make commercial solar-grade silicon, Desaulniers said the graphite mine has no technical risk. It sits near a smaller operation by Imerys Graphite and Carbon _ partially owned by Power Corp.—that produces about 25,000 tonnes of material a year, or two per cent of world supply.

“The market is kind of obvious. There is a already a track to follow that investors like to see,” Desaulniers said at a news conference announcing the study results.

Electric cars currently make up less than one per cent of global automobile sales but their share is expected to grow in the next decade. Tesla is building a large battery factory in Nevada, while Volkswagen has said it wants to build up to three million electric cars a year by 2025. Apple is also rumoured to be working on an electric car.

“When big guys like this start to invest massively into a gigafactory for batteries, that’s very exciting because they will require a lot of graphite and lithium and all the raw materials,” said Desaulniers.