Protesters outside a Nanaimo meeting between Trudeau and B.C. premier John Horgan rallied against what they argue is a contradictory policy of supporting climate initiatives and backing a pipeline project 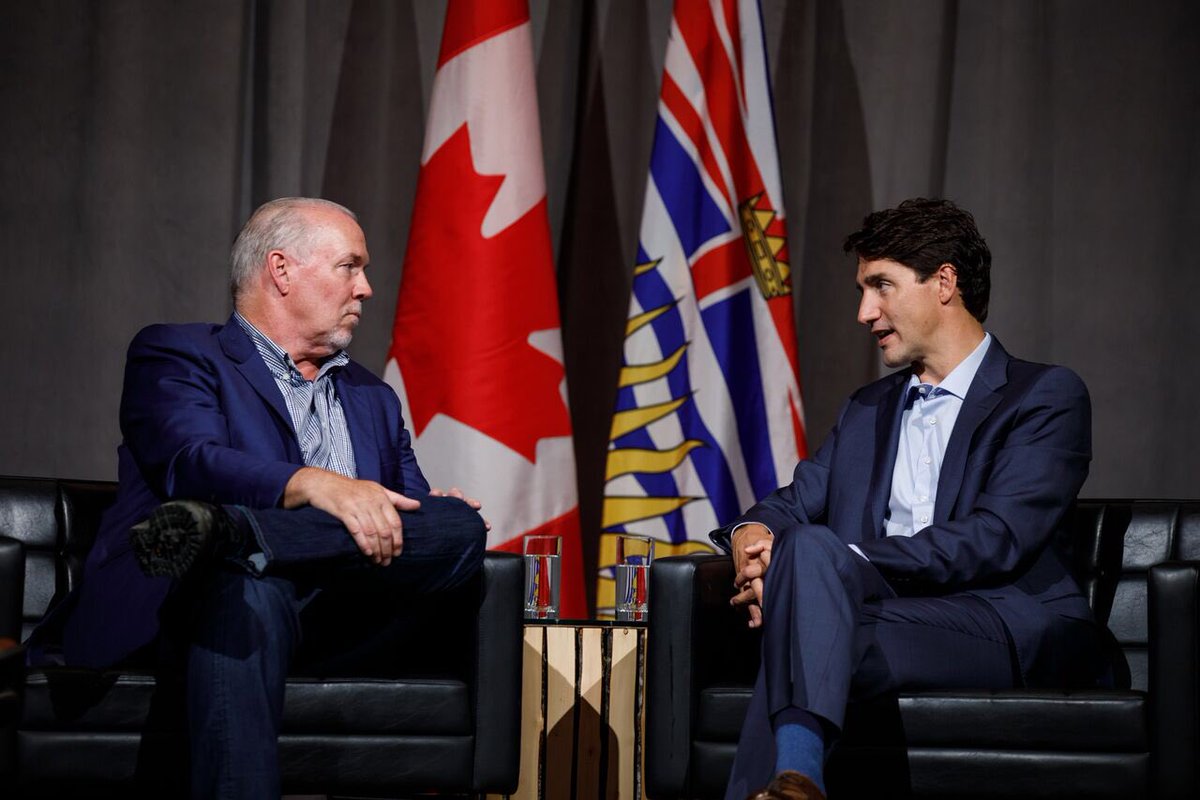 NANAIMO, B.C.—Justin Trudeau’s twin objectives to reduce Canada’s carbon emissions and build a pipeline to carry oilsands bitumen to the coast collided Wednesday in a province ravaged by wildfires that the prime minister’s own government attributes to climate change.

Several hundred pot-banging, whistle-blowing pipeline protesters gathered outside the Vancouver Island Conference Centre where Trudeau and his ministers were holed up for a cabinet retreat amid the acrid smell of smoke from the hundreds of wildfires burning across British Columbia.

They questioned how Trudeau can claim to be concerned about climate change when his government is paying $4.5 billion to Kinder Morgan to purchase the Trans Mountain pipeline and ensure it’s expanded to carry Alberta oil to B.C.’s coast.

“Inhale Justin, that’s the smell of global warming,” said another.

New Democrat MP Sheila Malcolmson, who represents Nanaimo-Ladysmith, told the protesters that the Liberal determination to get the pipeline built is “a betrayal of everything Trudeau campaigned for.”

Inside the conference centre, Trudeau and his ministers met with B.C.’s NDP premier, John Horgan, who has vowed to use every possible avenue to block the pipeline project.

After the meeting, Horgan thanked the Trudeau government for its efforts to help fight the wildfires. And he said he’s “grateful” the federal government shares his province’s commitment to combating climate change, which he blamed for causing the “catastrophic fire season.”

At the same time, however, Horgan reiterated his government’s staunch opposition to the pipeline expansion project, which he said would result in a seven-fold increase in tanker traffic off B.C.’s coast and, thus, increase the chances of a “catastrophic spill.”

Horgan said he and Trudeau briefly reiterated their different points of view on the project during Wednesday’s meeting but the focus was on the many issues on which their two governments are “in unison.”

B.C. New Democrat MP Alistair MacGregor, who joined the protest outside the retreat, said later that Horgan supports the “overall objectives” of the Trudeau government to combat climate change but those objectives don’t “mesh with buying a pipeline that’s going to be exporting diluted bitumen.”

“That is where Premier Horgan has the very real conflict and we agree with him on that.”

Environment Minister Catherine McKenna tried to square the circle of the federal approach to pipelines and climate change.

On her way into the retreat, she said the forest fires “demonstrate that climate change is having a real impact on Canadians.”

“We know we need to be taking serious action on climate change and that’s exactly what we’re doing,” she added, touting the federal plan to put a price on carbon, phase out coal and make historic investments in green infrastructure and climate adaptation.

That said, McKenna said the country is in a transition from its reliance on fossil fuels that contribute to global warming.

“Transitions do not happen overnight,” she said. “I’ve always said I’m the environment minister for energy workers as much as environmentalists.”

“We have resources, natural resources that have been developed very, very sustainably,” Sohi said.

“We need to get those resources to non-U.S. international markets to reduce our dependency on one single customer, at the same time losing $15 billion of potential revenue that we can use to transition to a low-carbon economy and … actually make more investments in clean technologies and protecting of our environment.”

The pipeline protesters were joined by some federal public sector workers who complained bitterly about the Phoenix pay system fiasco, in which thousands of public servants have been overpaid, underpaid or not paid at all.

“We have a message for the prime minister and his cabinet,” Public Service Alliance of Canada president Chris Aylward told the crowd.

“You start showing respect to federal public sector workers or you will pay in October of 2019.”

For all the noise outside the cabinet retreat, Liberal insiders say their party’s internal polling suggests British Columbians are divided over the Trans Mountain pipeline expansion.

Moreover, they say their polling suggests that all seven ridings on Vancouver Island—six currently held by the NDP, one by Green party Leader Elizabeth May—could be up for grabs in next year’s federal election.