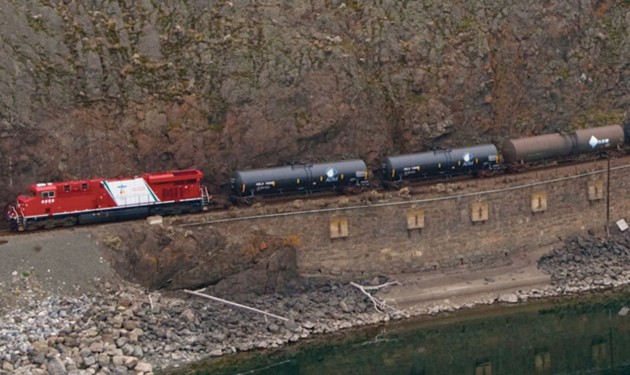 Older DOT-111 rail cars, pictured above, will no longer be used to transport dangerous materials

OTTAWA—Ottawa will retire the older DOT-111 rail tanker cars—the ones involved in the deadly Lac-Megantic tragedy—several months earlier than planned, The Canadian Press has learned.

The tank cars will no longer be able to transport crude oil or other dangerous goods on Canadian railways as of Nov. 1.

“It’s clear that to transport crude oil, we need something more robust,” Garneau said. “That’s why we’re heading to a new standard, which is the TC-117.”

The new class of tank car, which was announced in May 2015, is described as having a thicker steel hull, thermal protection, a full head shield, protective valve covers and a bottom outlet valve for safety.

“This type of tank car will be much more able to resist puncture,” Garneau said.

Garneau has scheduled a news conference in Montreal on Monday, where he is expected to announce he will move up the timeline for retiring or retrofitting the older DOT-111s, which have been described as vulnerable to punctures even at low-speed impacts.

These cars, which have long been the workhorse of the North American fleet, won’t disappear from the tracks altogether, but will no longer be allowed to transport dangerous materials such as crude oil.

“The reality is we can’t stop the transport of dangerous goods across the country,” Garneau said. “But we can certainly take many more precautions, and that’s what our government is doing.”

In the wake of the Lac-Megantic tragedy, a number of measures were announced in order to minimize the risk of accidents.

These included reducing the speed of convoys in urban areas and letting municipalities know what kind of dangerous materials could be passing through their territories.

Garneau said more action is possible in the future.

“We are currently exploring these measures. I’ll discuss them when the time and place are right,” he said. “It’s certainly something that’s important to me because I want to ensure, to the extent possible, that there are no accidents while transporting dangerous goods.”

The use of rail cars to transport oil has soared in recent years.

And while the rail industry initially balked at the high cost of Ottawa’s plan to replace the cars, Garneau maintains the two sides are working together.

“It’s progress, because we managed to get everyone’s agreement to accelerate this process,” he said.

Canada is also working with the United States, since the rail networks are interconnected and much of the oil circulating in Canada enters from the U.S. Midwest.

A railway still passes through Lac-Megantic, and Garneau said he’s not ruling out the possibility of building a new bypass route that would steer trains away from the town’s core.

A preliminary report by engineering firm Aecom proposed a 12-kilometre bypass that would cost $115 million. The second phase of the study will evaluate environmental impacts and identify any homes that would need to be expropriated.

But some Lac-Megantic citizens, who have long been calling for a bypass, have expressed frustration that the infrastructure likely wouldn’t be built before 2021.

Garneau promised to collaborate with citizens and said he would be meeting the city’s mayor to discuss the study in the near future.

He said he would do what he could to speed up the process, while pointing out the contract is being managed by the city.