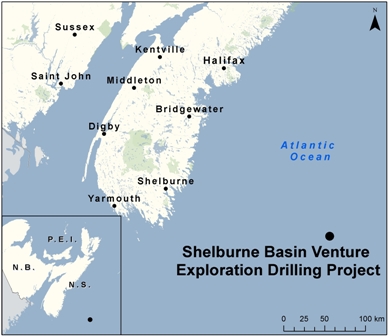 HALIFAX—Two kilometres of pipe that connects an offshore drilling rig to a wellhead deep under the ocean broke off and sank in a storm off Nova Scotia’s coast Saturday, prompting concerns from an advocacy group over the risks of deepwater accidents caused by harsh ocean conditions.

Shell Canada says there was no drilling fluid or hydrocarbons leak because the pipe had already been drained of fluids and a blowout protector remained in place over the well.

The Scotian Shelf includes some of the province’s richest fishing grounds for haddock, and a huge spawning area for lobster.

John Davis, director of the Clean Ocean Action Committee, said Monday the incident is a reminder of the enormous power of huge offshore waves on the Scotian Shelf _ and the risks of an offshore accident in one of North America’s most productive fishing grounds.

“It’s another indicator to us that we need a regulatory regime that makes sense, and … basically takes notice of the fact we’re at the edge of our technological ability,” he said in a telephone interview.

Environmentalists and fishermen have questioned the amount of time it would take the multinational company to bring a vessel and a capping system to the Shelburne Basin offshore site, about 250 kilometres off the southwestern coast of Nova Scotia, in the event of a blowout.

A Shell spokesman said in an email that in this instance the company was taking a precautionary measure ahead of a storm and there was no risk of a leak nor is there any need to bring in additional equipment.

Cameron Yost wrote that as the drill ship moved away from the well site, high and heaving waves caused the “riser tensioner system” to break off and fall to the bottom of the ocean.

“The well was successfully shut in prior to the disconnect and the blowout preventer is in intact so there is no risk of a leak,” he wrote in an email.

He said the drilling ship Stena IceMAX had safely disconnected from the company’s Cheshire well, a step that had been taken without incident in the past at the location, about 225 kilometres east of the coast.

Yost also said that for the time being operations were suspended

A spokeswoman for the Canada-Nova Scotia Offshore Petroleum Board says the regulator isn’t doing its own investigation because there was no health, safety or environmental issue involved in the incident.

Kathleen Funke says the board has sent two safety inspectors to the ship and will monitor the investigation carried out by Shell.

“Shell acted appropriately and they took the appropriate precautions,” she said in an interview.

“The blowout preventer functioned perfectly. This is not a spill response issue at all.”

She said at this point it’s unclear if the material on the ocean floor will be retrieved. Yost also said that will be reviewed by investigators.

When it approved the licence for drilling an exploratory well, the board’s chairman said he was “confident that all reasonable precautions to protect safety and the environment have been taken.”

However, the Ecology Action Centre, the province’s largest environmental group, said it remained concerned over the number of days it would take for Shell to bring a subsea technology used to cap oil spills.

The Nova Scotia premier’s office has praised the $1 billion exploration program, calling it “one of our most exciting opportunities for growth.”