Dwarfed by activity south of the border, Canada's capital spending on industrial chemical industry projects is expected to jump by 65 per cent this year 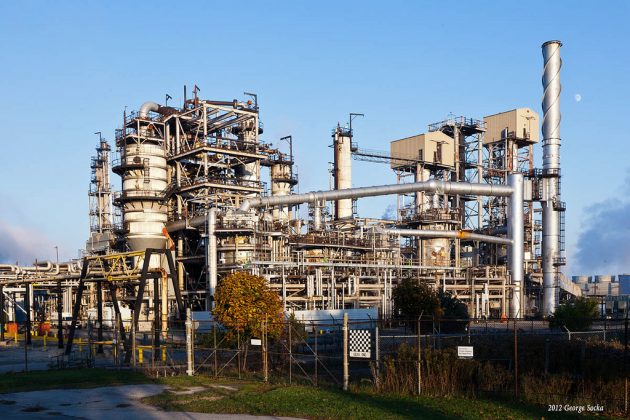 CALGARY – Canada’s slow-growing petrochemical industry is headed for its biggest surge of expansion spending in five years in 2019, thanks in large part to incentive programs by federal and provincial governments.

The government support has angered environmental groups who point out that almost 90 per cent of plastics used in this country wind up as litter or in landfills.

But it’s welcomed by the industry as a necessary factor if Canada is to keep up with its competitors in the United States.

Capital spending on industrial chemical industry projects in Canada this year is expected to jump by 65 per cent to $1.9 billion, the highest since $2.2 billion in 2014 and third-highest in a decade, according to a year-end members survey by the Chemistry Industry Association of Canada, which represents producers of 75 per cent of the country’s chemical products by value.

The growth is coming despite rising concern over single-use plastics. Many jurisdictions are banning plastic straws and grocery bags in reaction to scenes like the great Pacific Ocean floating garbage island between Hawaii and California and dead and dying sea creatures.

His organization is calling for a national strategy with performance standards and tougher enforcement to get Canada to zero plastic waste by 2025.

The former is to receive $200 million in royalty credits under a 2016 Alberta NDP government program – the latter is backed by $100 million through Ontario’s Jobs and Prosperity Fund and $35 million from Ottawa’s Strategic Investment Fund.

“On a global basis, as all jurisdictions are trying to attract investment, the governments at various levels – federal, state and provincial – play a role,” said Nova CEO Todd Karran in an interview.

He said it’s always been so – the company’s $1-billion polyethylene expansion at its central Alberta complex, opened in 2016, benefited from a multimillion-dollar provincial royalty credit program created by a Progressive Conservative government to spur new sources of ethane to remedy a shortage of feedstock.

Meanwhile, a final investment decision is expected soon on a $4-billion polypropylene project by a joint venture of Calgary-based Pembina Pipeline Corp. and a subsidiary of Kuwait Petroleum Corp., eligible for $300 million in royalty credits under the 2016 Alberta program.

“Our made-in-Alberta plan means new projects must do the right thing for the environment, and by upgrading more here at home instead of shipping our raw product south of the border, we reduce emissions and ensure Alberta is among the most responsible and lowest emissions petrochemical producers in the world,” provincial Energy Minister Marg McCuaig-Boyd said in a statement.

David Chappell, senior vice-president of petrochemical development for Inter Pipeline, wouldn’t say if the company has applied for further government funding, but conceded it would be “crazy” not to consider it.

“Even in a low-carbon future, you’re going to see huge demand for petrochemicals and that’s good for the future of Alberta and the oil and gas industry,” he said.

Canadian petrochemical expansions are dwarfed by the activity south of the border.

A total of 333 new U.S. chemical industry projects using shale gas had been announced as of September, according to the American Chemistry Council. Those projects account for US$202 billion in new capital investment and are expected to create 431,000 direct and indirect jobs by 2025.

In both Canada and the U.S., the main driver of growth is an ample and inexpensive supply of natural gas-based feedstocks like methane, ethane and propane that can be transformed into chemical building blocks such as methanol, ammonia, ethylene and propylene, said Stephen Zinger, senior vice-president, chemicals, at consultancy Wood Mackenzie.

Provincial and federal government supports, and Ottawa’s recent decision to allow a 100 per cent accelerated capital cost allowance for new investments, are being noticed by investors, said Bob Masterson, CEO of the Chemistry Industry Association of Canada.

“Where for most of the last decade the global chemistry community has just bypassed Canada … now we’re back on the radar. We’ve got the resource, we’ve got the people and now we’re starting to see the favourable investment conditions at the provincial and federal level,” he said.

The Canadian industry is well aware of its environmental reputation.

On Wednesday, Nova Chemicals announced it was one of 30 founding members of the international Alliance to End Plastic Waste, which is making a combined initial commitment of US$1 billion to find ways over the next five years to eliminate plastic waste in the environment.