Natural gas producers drilled 397 shale wells through the first six months of 2017, more than twice the number they sank in the same period last year, meaning fracking crews are suddenly in short supply. 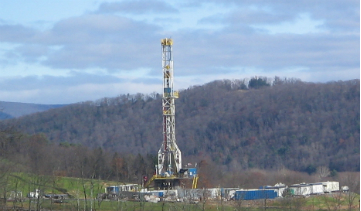 PITTSBURGH—Pennsylvania’s moribund drilling industry, which has struggled with persistently low prices and a dearth of infrastructure to get its product to market, is showing signs of life.

Natural gas producers drilled 397 shale wells through the first six months of 2017, more than twice the number they sank in the same period last year. About 20 additional drilling rigs are exploring for natural gas. Fracking crews are suddenly in short supply.

While the pace remains much slower than it was during the industry’s boom years earlier this decade, when a drilling frenzy transformed sleepy towns and rural areas into economic hotbeds, 2017 has produced a modest rebound and hope of better days ahead in the Marcellus Shale, the nation’s largest natural gas field.

“There’s a cautious optimism out there right now,” said David Spigelmyer, president of the Marcellus Shale Coalition, a trade group.

One big reason is that natural gas prices have recovered from 20-year lows, nearly doubling since last year, according to S&P Global Market Intelligence.

Drillers had been battered by several years of rock-bottom prices caused by oversupply and inadequate pipeline capacity. The low prices were good for consumers, and businesses and manufacturers that use gas, but they cost energy companies billions and prompted some of them to stop drilling altogether.

Houston-based Southwestern Energy Co., one of the most active producers in the Marcellus, drilled only two wells through the first six months of 2016. That has ramped up to 38 so far this year.

Drillers have also been encouraged by the development of big pipeline projects like Rover, Mariner 2, Atlantic Sunrise and PennEast that will provide access to key markets. Power companies, meanwhile, are rushing to build new plants to take advantage of cheap Marcellus gas, providing another outlet.

The nascent turnaround hasn’t extended to all corners of the vast gas field.

Drillers are narrowly focusing their efforts on areas with the richest deposits of shale gas, in Pennsylvania’s extreme southwest and northeast. Three counties—Washington, Greene and Susquehanna—account for more than 60 per cent of the wells drilled so far this year. Other counties remain quiet.

“We’re in the first inning of a nine-inning game,” said Spigelmyer, who has long complained that Pennsylvania’s regulatory climate hinders growth and now worries about surging competition for investment dollars from the Permian Basin in Texas. “It’s not where it needs to be long-term to grow the play significantly and to grow all of the Marcellus, not just part of it.”

While the 2017 numbers are signs of an industry turning the corner, well counts and drilling rig numbers aren’t the measure of financial health they once were. Drillers have greatly improved efficiency, coaxing more gas out of each well by dramatically extending the wells’ horizontal lengths. That raises the economic value of the wells and reduces the number that producers need to drill to make money.

In announcing the deal to investors, the company said it was bullish on the Marcellus, which Schlotterbeck called the “most economic natural gas basin in the country.”

Related Stories
Shell selling shale assets in Louisiana, Wyoming for US$2.1B
Shale gas in Quebec not worth the risk: environmental report
Poland looks to reduce dependence on Russia with shale gas law
Oil and gas drilling activity expected to fall by 10% in 2020
Manufacturing In Focus