The 34 turbines will generate enough electricity to power about 35,000 homes, while ongoing operations at the site will create 10 full-time jobs 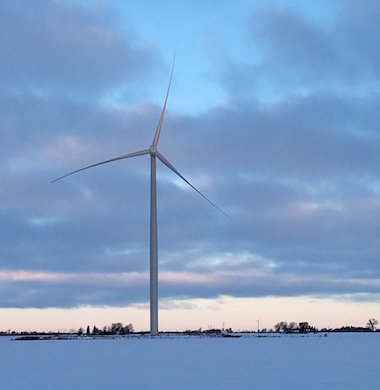 OAKVILLE, Ont.—Turbines at a new wind farm in southwestern Ontario have begun feeding power into the province’s electricity grid.

Siemens Gamesa Renewable Energy Ltd. said April 9 it has commissioned the 100 megawatt North Kent Wind farm after nearly a year of construction in Chatham-Kent. The turbine manufacturer was contracted by the wind farm’s developers Samsung Renewable Energy and Pattern Development to deliver the power generating equipment.

“North Kent Wind was built entirely by Ontario workers and is generating substantial economic benefits in the Municipality of Chatham-Kent by injecting more than $40 million in direct spending into the local economy over the next 20 years,” Mike Garland, Pattern Development’s president, said in a statement.

All of the turbine components were produced in Ontario and construction on the site employed about 125 workers at peak.