Even before the protests, the project was well behind schedule and over budget. Estimated costs have soared to $11.4 billion from $7.4 billion four years ago and first power has been delayed until 2019 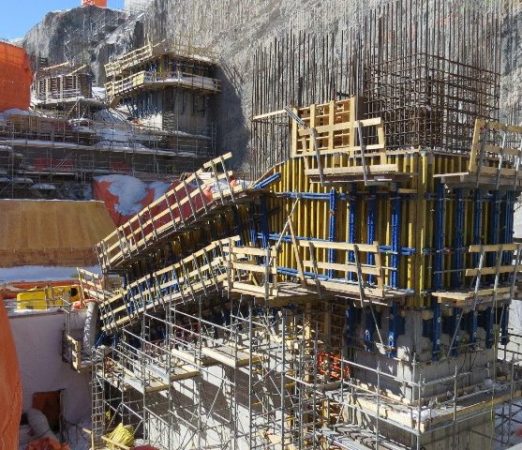 Construction of the powerhouse at the Muskrat Falls megaproject in Labrador earlier this year. PHOTO: Nalcor Energy

ST. JOHN’S, N.L.—Indigenous leaders and the Newfoundland and Labrador provincial government came out of a marathon meeting early Wednesday touting significant progress made on the Muskrat Falls project.

Premier Dwight Ball announced in the early hours of the morning that an independent expert advisory committee—made up of provincial, federal, municipal and indigenous groups—will be created to monitor the mutli-billion-dollar hydroelectric project in Labrador and look at ways to reduce possible methylmercury contamination.

The project is upstream from 2,000 Inuit and other residents in the Lake Melville region, and critics are worried about methylmercury contamination if too many trees are left to rot at the bottom of the reservoir when the 41-square-kilometre area is flooded.

The provincial government also is agreeing to consider further clearing of the Muskrat Falls reservoir if needed.

“Going forward, decisions will be made using science-based research,” Ball told reporters after meeting with leaders from the Innu Nation, the Nunatsiavut Government and the NunatuKavut Community Council.

The meeting came after about 50 protesters entered the central Labrador site Saturday and occupied an accommodation complex, prompting Nalcor, the Crown corporation building the project, to remove at least 700 workers from the grounds.

On Monday, the company obtained an injunction naming 22 people occupying the site for potential arrest. The head of Nalcor said in a statement that protesters are risking serious injury, and has urged them to depart the site.

“You cannot break into or trespass on your own land,” demonstration organizer Denise Cole of Goose Bay said to applause from about 40 people gathered at the legislature in St. John’s as the meeting got underway Tuesday.

After the meeting, Nunatsiavut President Johannes Lampe told anti-Muskrat Falls protesters to go home because they had succeeded in their goals.

“I feel that the progress that has been made today will give the Labrador Inuit the opportunity to go back home to your family, your friends, your children, your grandchildren.”

Todd Russell, the president of the NunatuKavut Community Council, said he is confident the agreed proposal will minimize the affects of methylmercury and secure his community’s food and culture.

“The decisions that will be made, going forward, will not be at the whim of government,” Russell said. “They will be made by science and it will incorporate the traditional knowledge of our people. This is a huge step forward.”

Anastasia Quepee of the Innu Nation told reporters that her thoughts have been with protesters in Ottawa and in Labrador.

Supporters have been gathering around the Human Rights monument in Ottawa for Billy Gauthier, Delilah Saunders and Jerry Kohlmeister, who have been staging a hunger strike there in efforts to draw attention to the Muskrat Falls dispute.

The project is well behind schedule and over budget. Estimated costs have soared to $11.4 billion from $7.4 billion four years ago. First power has been delayed until 2019.