Gary Conley is too cool for school.

After earning his keep as a shop teacher in Illinois, Conley quit, deciding the laborious task of recreating a functioning V8 engine that fit in the palm of his hand was more to his liking. 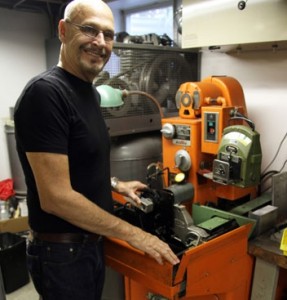 “I made my first V8 from a casting kit,” Conley says, “and then thought I could do a little bit better than that.”

With the support of his wife Cheryl, a little patience and a whole lot of dedication to his craft, Conley launched his namesake precision engine company with a quarter-scale 4.27 cubic-inch V8, dubbed the ‘427’.

As the buzz around his engines grew—Conley and his 427-equipped Shelby Cobra model appeared on popular 1990s sitcom ‘Home Improvement’—so too did business.

While mulling the idea of a scaled-down V12 engine, Conley was approached by automaker Chrysler with a proposition: can you build a quarter-scale Dodge Viper V10 engine?

With a full-size, 450-horsepower V10 shipped to his Glen Ellyn, Ill., shop, Conley got to work figuring out how to tame the venomous Viper’s powerhouse.

After reverse-engineering the massive engine and dedicating more than four years to the project, the finish line was in site.

But after the foundry where all of Conley’s castings were done was devastated by a fire that destroyed $350,000 worth of molds from both the V8 and V10 engines, his business—and spirit—was gutted.

With his hard work, though, came resilience, and Conley rebounded, first purchasing Perry Products, the company that produced the carburetors he used for his V8 engines, and then modifying the V10 master dies into a new V8, dubbed the Stinger 609.

Named for its 6.09 cubic-inches of displacement, the engine is all investment cast to create real-to-life detail that other casting methods simply can’t accommodate, Conley says.

With nearly all the parts made almost entirely in-house (he even molds his own distributor caps), Conley says he’s not a “job shop,” but rather a specialty shop.

There are very few parts Conley outsources, and he only does so in cases where he’s better served.

“The spark plugs are best left to somebody who knows what they’re doing,” Conley says.

With a 10-40 thread, the plugs in the Stinger are small and expensive—but worth the cost.

“The problem with model spark plugs is they leak,” Conley says, noting the porcelain work on the Rimfire brand pieces he brings in is unmatched.

With a naturally-aspirated V8 starting at $5,600, adding a supercharger—Conley says the forced induction versions will produce about 12 PSI of boost and nine horsepower—can sell for more than $7,500.

Despite the high price tag, customers are paying for precision, and Conley says he’s in the business because, as his motto goes, perfection is almost good enough.

“I’ll never be rich doing this, but I’ve got the best job in the world,” he says, proudly.

Conley says he can build about 50 to 100 engines annually, and is on back order for about the next year-and-a-half.

“It didn’t come without headaches and a lot of problems because (not everything) scales down,” Conley says.

Case in point: the molecular size of engine oil, which no matter the application maintains the same characteristics.

Coupled with the high speed of the pistons in his replica motors, Conley says controlling oil flow was one of the biggest hurdles he’s faced in his near 30 years of building.

Conley says to combat excess oil in his engines, he uses a dry sump lubrication system to pump oil out of the crank case, but that in itself was a challenge.

“Where do you go to (get) a three-stage dry sump?” he asks, rhetorically. “You make your own.”

It seems he’s good at that.