Following the deadly train derailment that razed a portion of Lac Megantic, the investigation by Transport Canada and the RCMP found that Irving Oil had not been classifying the crude oil being carried by trains as a dangerous shipment 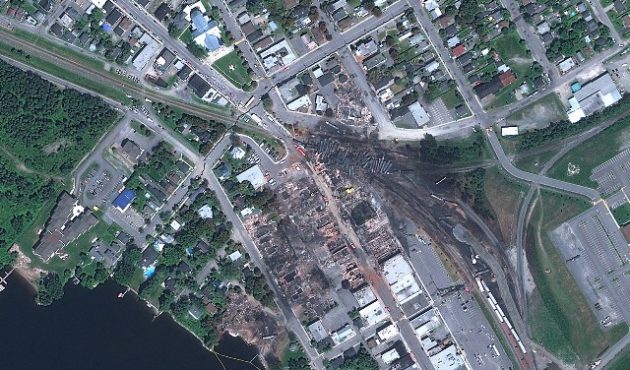 An aerial view of the destruction of Lac megantic. PHOTO: DigitalGlobe

SAINT JOHN, N.B.—Irving Oil has been ordered to pay $4 million after pleading guilty to 34 counts stemming from the investigation into the 2013 rail disaster in Lac Megantic, Que.

The charges under the Transportation of Dangerous Goods Act result from a joint investigation by Transport Canada and the RCMP that was prompted by the deadly train derailment.

On July 6, 2013, a train carrying 7.7 million litres of crude oil sped toward the small Quebec town at 104 km/h before derailing, killing 47 people in the resulting fire and explosions.

“Today, we close another chapter in this tragic event,” Transportation Minister Marc Garneau wrote in a statement Thursday.

It will also pay nearly $3.6 million for the implementation of research programs in safety standards under the Transportation of Dangerous Goods Act and its regulations.

The offences were committed over eight months, from November 2012 to July 2013, involving transportation of approximately 14,000 rail cars of crude oil for Irving Oil.

Following the train derailment in Lac Megantic, the investigation by Transport Canada and the RCMP revealed that Irving Oil had not complied with all applicable safety requirements by not classifying the crude oil being carried by trains as a dangerous good.

In addition, the shipping documents on board the trains were incorrect.

The statement also says Irving Oil did not adequately train its employees in the transportation of dangerous goods, an offence under the act.

Irving Oil issued its own statement, saying it believes strongly in the importance of safety and regulatory compliance, and that it takes the charges seriously.

“The misclassification of crude oil did not cause or contribute to the railway accident in any way,” the statement reads.

Irving Oil said it has undertaken a comprehensive review of its procedures relating to the transportation of dangerous goods and now has an enhanced training program for its employees.

“The company will remain vigilant in all of our operations, upholding our commitment to safety for employees, customers, and communities,” it wrote.

“Transport Canada continues to closely monitor the safety of rail operations and the system, as well as the safe transportation of dangerous goods by all modes of transport across Canada,” he wrote.