According to the automaker, the redesigned 2014 Chevrolet Silverado and GMC Sierra 1500 both received the NHTSA’s five-star safety rating, the first time a truck has done so since the organization changed its new vehicle assessment program for the 2011 model year.

“Safety is as important to truck buyers as it is to car buyers,” GM’s general director of vehicle safety Gay Kent said in a statement. “Silverado and Sierra set a benchmark for pickup truck safety by offering a full array of advanced features designed to protect occupants before, during and after a collision.”

Built on the same platform, the trucks feature fully boxed frames and the use of high-strength steel throughout, offering rigidity in the event of a collision. 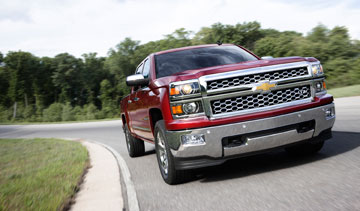 The all-new Chevrolet Silverado offers the best fuel consumption of any V8 pickup on the market, according to GM. PHOTO General Motors

According to GM, the NHTSA only tested the crew cab models of the new Silverado and Sierra.

The automaker expects the popular four-door versions of the trucks to account for 60 per cent of its light-duty full-size pickup sales in 2014.