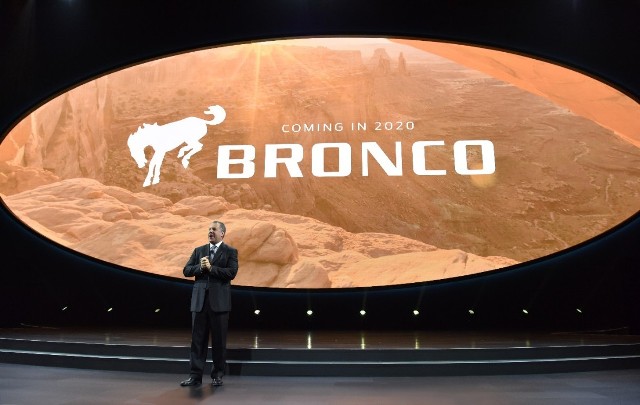 Ford president for the Americas Joe Hinrichs unveiled the company’s plan to bring back the Bronco at the North American International Auto Show in Detroit Monday. PHOTO: Ford

DETROIT—Ford Motor Co. is bringing the Ranger midsize pickup back to North American soil and reviving the Bronco SUV after a two-decade hiatus.

The automaker announced the fresh additions to its lineup at the North American International Auto Show in Detroit Jan. 9—a week after it said it would cancel a $1.6 billion plant planned for San Luis Potosi, Mexico and redirect the investment toward electric and autonomous vehicle development and production in the U.S.

Ford pulled the Ranger from the Canadian and U.S. markets in 2011 amid slumping sales of small trucks, but said it will reinstate the pickup in 2019.

“We’ve heard our customers loud and clear. They want a new generation of vehicles that are incredibly capable yet fun to drive,” Joe Hinrichs, Ford’s president of The Americas, said. “Ranger is for truck buyers who want an affordable, functional, rugged and maneuverable pickup.”

The Bronco, meanwhile, has been in the ground for 20 years.

It enjoyed a 30-year production run between 1966 and 1996, but Ford killed the SUV when sales started slumping. Ford touted the revived vehicle as a “no-compromise midsize 4×4 utility for thrill seekers,” but released no other specifics.

Ford also announced Monday it will finally be offering a diesel engine option in its best-selling F-150 starting in 2018.