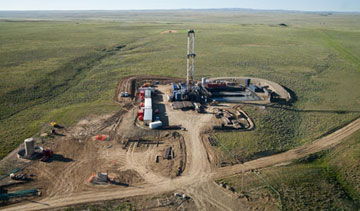 The oil and gas company expects some key expenses in the U.S. to decline by $100 million from previous estimates. PHOTO Encana

CALGARY—Encana Corp. had a US$601 million loss in the second quarter but says the latter part of 2016 is shaping up better than expected.

The Calgary-based oil and gas company says that some of its key expenses will be US$100 million less than the previous estimate and savings will be continued into 2017.

It’s also reinvesting savings and funds from the sales of key assets to increase its 2016 capital program by US$200 million.

Encana expects to get US$1.1 billion of proceeds from two asset sales that will close by the end of July.

The second-quarter loss, reported in U.S. currency, amounted to 71 cents—an improvement from the same time last year when Encana lost $1.61 billion or US$1.91 per share.